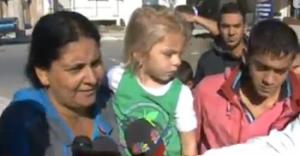 The Irish police have removed children from several homes in recent weeks, suspecting child abduction, because the children were blonde and blue-eyed, and not resembling their biological parents. Photo Credit: greece.greekreporter.com

Two blond children who were taken by Irish police from their Romanian Gypsy parents were returned to their families after DNA tests determined that the children were rightfully theirs, an episode that raised accusations of racism.

The Irish police were responding to public tipoffs fueled by media coverage of an alleged child-abduction case in Greece involving a blond-haired girl and a family of Gypsies, known as Roma.

Justice Minister Alan Shatter told lawmakers he was "pleased and relieved" that the children had been returned to their homes. He ordered the police commander, Commissioner Martin Callinan, to produce a report explaining why officers felt it necessary to take the children - a 2-year-old boy and a 7-year-old girl - from their families.

"We must all be particularly conscious of the regrettable distress that arose for the two families and their children," Shatter said.

He defended the need for police and child welfare officers to remove children from potentially dangerous homes, but cautioned that Irish authorities must ensure "that no group or minority community is singled out for unwarranted suspicion in relation to child protection issues."

In both cases, police suspected that the children might be victims of abductions because they were blond-haired and blue-eyed, unlike the rest of their immediate relatives.

An estimated 5,000 Roma have settled over the past decade in Ireland, where many have been linked to organized street-begging rackets involving children.

On Monday, police went to one Roma family's home in southwest Dublin and sought the passport and birth certificate of the girl. The family produced them, but police opted to issue an emergency child protection order and place the child in state care. Police said the Romanian passport was not useful because it had a baby photo, not the girl's current appearance, while the birth certificate did not match Dublin hospital records.

On Tuesday, police in the midlands town of Athlone went to another Roma family's home and asked both parents to provide mouth-swab samples from their son and themselves. The boy then was taken away by social workers overnight and returned the next day after the child's parentage was confirmed.

Irish child protection law prohibits the publication of the names of either family because their cases involve the placement of children into state protective custody.

The Athlone family's father told reporters he had assured police that other relatives also had blond hair and blue eyes. He said his wife couldn't sleep all night and the boy's older sister cried much of the night.

The Dublin family's lawyer, Waheed Mudah, issued a statement outside the Family Court accusing the police of acting without justifiable cause.

Mudah said his clients were "very conscious of the fact that this case has been linked" with the Greek child-abduction case, "which has nothing to do with them."

He said his clients hoped parents across Ireland would "consider how they would feel if one of their children was taken away in similar circumstances for similar reasons. They hope no other family has to go through the experience they have suffered."

Pavee Point, a Dublin-based support group for Gypsies, said the police were guilty of racial profiling and child abduction.

The group's co-director, Martin Collins, said he feared that more children "of Roma parents who are not dark-skinned and have brown eyes could be taken away, one after the other, for DNA test after DNA test. It's outrageous. It's despicable."

Ireland's national police, the Garda Siochana, confirmed that both children were returned to their families. In a statement the force defended its actions as consistent with child-protection laws, and said the public should be assured "that we take extremely serious(ly) all reports received from members of the public concerning child welfare issues."

I believe that this is a blatant case of racial profiling. The only reason the children were taken from their families was because they looked different from their family members. I know of many families where some members have distinctly different traits, physical or otherwise, that distinguish them from others, mine included. To have one's children snatched away for really no good reason is terrifying, not to mention intolerant. Plus, the only reason that this incident happened now is because of the incident in Greece; the police made an assumption that because some people of a certain ethnic group were found to be criminals (namely kidnappers), other people of that group are also capable of doing so.

I think this case is outrageous. From the sounds of it, police just took these children from their parents without any questions or interrogations. I understand how they may have been a little bit concerned due to the drastic differences in appearance and because of other cases similarly taking place but that gives them no right to take the children. That would be horrifying to be those children. I'm sure they had no idea what was going on.

Since it is abnormal for a child with blond hair and blue eyes to have parents without the same features I understand the police's suspicions but to act upon their gut feelings without any proof is absurd. I hope that since this case the authorities have stooped their racial profiling on the Roman people and realize that they all aren't thieves.

I find this story to be quite ridiculous. The only reason the little girl was taken from her family is because she looked different on the outside. I have brown hair and brown eyes and my mom has blue eyes and blonde hair. I can't imagine being so young and being taken away from the woman I was raised by and attached to, this family must be horrified. Hopefully things like this do not continue to occur.

I find this story to be quite ridiculous. The only reason the little girl was taken from her family is because she looked different on the outside. I have brown hair and brown eyes and my mom has blue eyes and blonde hair. I can't imagine being so young and being taken away from the woman I was raised by and attached to, this family must be horrified. Hopefully things like this do not continue to occur. - See more at: http://www.usaonrace.com/national-collegiate-dialogue/4586/conversation-...

I think this case is totally racist. In what right mind would any police force act without justifiable cause? I understand that there were cases that were similar in the sense that the parents would not look like their children and vice versa, however this is clearly racial profiling. Using this logic, shouldn't the Irish police also be doing the same exact thing to children that were adopted by parents with different ethnicities? Maybe a white child into a black family? However, they did not do this, and I feel as though they singled out this minority group (the Gypsies) wrongfully, even though they did think they were fulfilling their duties to the best of their ability.

it must have been a very scary situation for the parents having their children taken away from them like that. You hear cases like these on the news and there is no single way to justify such acts by the police. The fact that they took the kids even after they had done the tests is unnecessary and thats why it raises questions of whether racial profiling was involved where as it might have not. But all in all such cases just bring chaos to peaceful societies and bring about cases that rely themselves on the racial case. Officials have to watch what measures they take to ensure public safety, in that they shouldn't hurt the public in the process

Yes, it would be terrifying to have your children taken away by anybody, including police officials; but since there was a child abduction reported in which the children had similar traits as those two gypsy children, i don't think it is that big of a deal, better safe than sorry. The important thing is that the children were returned and the parents were not the kidnappers.