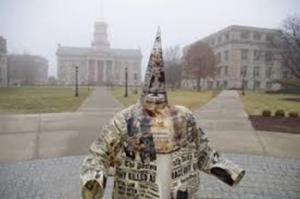 This KKK statue as an art form was displayed on the campus of the University of Iowa by a visiting professor and incited a strong reaction from black students. Photo Credit: college.usatoday.com

Could any good come from the KKK art display that has caused such a stir at the University of Iowa? Apparently, a 7-foot-tall rendition of a robed Klansman prominently displayed on the university’s campus by a visiting professor was unwelcomed by many black students who made their objections know to university officials.

The display was removed, without a strong reaction from university administrators. Many black students said they were traumatized by the display and upset by the university’s response which they deem insufficient. Black students and employees say the outrage over an art display depicting a Ku Klux Klan costume should be a catalyst to make the University of Iowa more welcoming to minorities.

Some students and faculty have come together to discuss the incident and to see whether it is an opportunity to create a meaningful dialogue about broader issues of race, which would include what life is like for black student and employees on the University of Iowa campus.

The University of Iowa African American Council, an advocacy group, members of which participation in the meeting, is hopeful that this incident and the follow-up discussions will encourage the university to increase efforts to recruit more black students and faculty members.

While the display may have shown some insensitivity as presented on campus, it could be the impetus to bring about education, inclusion and other positive outcomes.