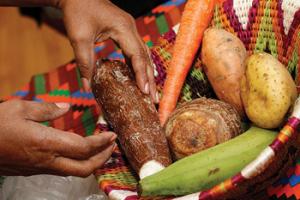 Preparing fresh foods as is done in parts of African can be a healthier alternative to fried foods and sweets. Photo Credit: foodandnutrition.org.

African foods may prove to be a healthier alternative for blacks rather than the traditional fried foods with lots of rich and sweet desserts. Classes are being held all across the United States to promote healthier eating habits by cooking fresh foods based on traditional African cuisine. Such foods are not only good for blacks, but for anyone.

Aimed at blacks but open to anyone, the "Taste of African Heritage" classes are sponsored by the Boston-based nonprofit Oldways, which promotes healthier eating through traditional foods. Sessions are held nationwide to encourage people to skip burger joints and processed meals and get comfortable in the kitchen cooking fresh food.

In a world of cheeseburgers and fried chicken, participants are learning to use ingredients such as beans, greens, rice, grains, vegetables and spices that are common in traditional African dishes. Foods are seasoned with things like ginger, allspice and curry rather than salt or lard, and meat servings are small and lean. Ingredients are sauteed, steamed or quickly boiled in pots with small amounts of oil; no breading or flour on a chicken thighs or onions, for example.

After only a few weeks attending a class at a church in downtown Birmingham, Dorsey said he's already lost a few pounds and has more confidence about what and how to cook.

Rickey Dorsey knows he doesn't have the best diet, and his plump belly proves it. "I'm definitely used to a lot of fried food and sweets," the Birmingham man said. "And sweet tea." Dorsey, 53, is trying to change that. He is among about 500 people across the United States who have participated in a program to learn about cooking fresh foods based on traditional African cuisine. "It was so interesting learning about the African culture," he said. 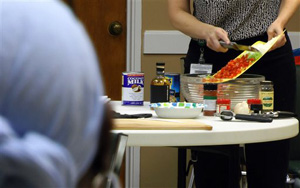 Classmate Sharon Reid, 54, said she's heard of ingredients like raw ginger for years but didn't know what to do with them. "This is fresh stuff," she said with an assortment of peas and beans spread on a table nearby. "And they teach you how to eat and to cut back on all the salt and stuff."

Formed in 1990, Oldways emphasizes traditional, plant-based diets like those from the Mediterranean region, Asia and Latin America over the processed items common in many American homes and restaurants. Following a pilot program held in 2012 for the African classes, the organization last year began using a $250,000 grant from Walmart to offer six-session classes across the country.

The sessions are targeted primarily at blacks, who suffer disproportionate rates of obesity, strokes, diabetes, heart disease and other ailments often linked to diet. While the Centers for Disease Control and Prevention estimates 35 percent of Americans are obese, blacks have the highest rates at nearly 48 percent.

Fifty of 150 planned courses already have been completed, and many participants are seeing measurable results, said Oldways president Sara Baer-Sinnott. Baer-Sinnott said that of 240 people who have completed personal evaluations, 66 percent lost weight, 38 percent had a decrease in blood pressure and 55 percent lost inches (centimeters) from their waist. 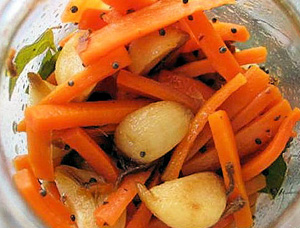 Linking healthy dietary practices with ethnic foods seems to be working, she said, and the classes will continue into 2015. "We're designing this so that one of the motivators is heritage," she said. "We're finding that it resonates with people."

But anyone can benefit from eating the foods that are from the African culinary heritage, said Mandy Willig, a dietitian and assistant professor at the University of Alabama at Birmingham who is serving as a volunteer instructor. "(The course) is designed exactly to show us that the actual African heritage consisted of lots of fruits and vegetables, of grains," she said. "It was a very low sodium diet that relied on a lot of herbs and spices to actually provide the extra flavor."

The courses are free. After listening to a brief lecture, students practice cutting up carrots and chopping onions. Afterward, they eat together. "The first thing we really want them to do is to just get in the kitchen more often," Willig said. "If you do that, above and beyond anything else, you're going to be healthier."