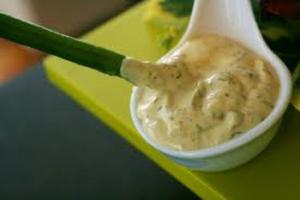 Quite creamy, sauce gribiche is often compared to a mayo-like sauce. In addition to being served with calf’s head, the French also serve this sauce with fish, chicken, hard cooked eggs and steamed asparagus. Photo Credit: fritosandfoiegras.com

A favorite French dish – especially to former French president Jacques Chirac – sauce gribiche is a traditional delicacy dating back to the late 1700s.

Often served with calf's head, it was first served in remembrance of the decapitation of another French head of state: King Louis XVI after the French revolution of 1789.

With roots in the Normandy region of France, the word "gribiche" originally referred to a "bad witch" or a woman in a bad mood. Legend says the sauce earned its name because it tasted so good that a spell must have been cast on it.

Quite creamy, sauce gribiche is often compared to a mayo-based sauce, and can be served with fish, chicken, hard cooked eggs or steamed asparagus if a calf's head is not readily available.

French cookbooks dating back to 1919 contain versions of the recipe that are still popular today, while variations exist all over France reflecting regional tastes and ingredients.

In the Savoy region of southeastern France, sauce gribiche is a common dish at the dining table of Lucette de Vaudrey, a local woman who insists she "always serves it with the traditional calf's head." She was kind enough to share her recipe – calf's head optional. 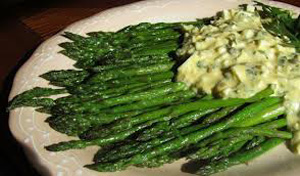 Mix together the following:
1 teaspoon of Dijon mustard
The yellow part of two hard boiled eggs
Grapeseed oil to taste

Mix together salt and pepper, the white part of the boiled eggs and five or six cut up Cornish pickles along with about ¼ cup of red onions, parsley and eight to 10 capers, drained, rinsed and squeezed dry.

Mix all the ingredients together and store the sauce in the refrigerator for one day before serving.