Cooking Eclectic Trini Curry ... A dish without a recipe 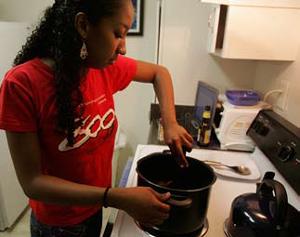 “What I want to know,” he says, “is how you stay so skinny with all this good food at your fingertips?”

“A fast metabolism,” I reply.

Less than 30 minutes have passed since my friend and culinary adventurer, Justin Yurkanin, showed up on this weekday evening with a cool bottle of wine, a distinct air of nervous readiness, and a keen ear for the reggae and soca I’d purposely put on rotation.

My task: to teach this Cincinnatian middle-child of Russian and French immigrants how to master the art of cooking Trinidadian curried chicken and curried channa and potato.
This man who has grown up on meatloaf and potatoes, and learned to love Indian food by exploring the curry houses in London’s Brick Lane, is about to find out that Trini curry is unlike anything he’s ever tasted – an infusion of Indian and Creole spices and random taste bud based additions. 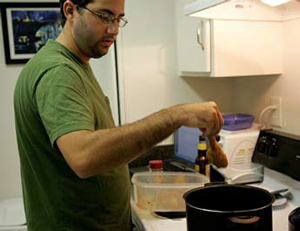 “This is my mother’s green seasoning,” I say.

Every time I leave Trinidad, my mother sends me off with carefully taped containers of seasoning. The sharp scent of blended chive, garlic, ginger, thyme, parsley, pimento peppers and cilantro (or chadon beni, as we call it at home) seeps into my packed clothes, forcing laundry days.

Justin is right. You cannot find these seasonings and spices in the grocery. I wasted days scouring the shelves for pumpkin and pimento peppers, but failed miserably. Some things, however, I am able to get from an ad-hoc grocery shelf in a local Jamaican restaurant.

“I guess you’d consider this a Creole seasoning in an Indian dish,” I say, dropping a few tablespoons onto the chicken Justin has slowly skinned under my watchful eye.
“That’s what is so cool about tonight,” he says. “You know about all this stuff.”
Just minutes before he arrived, I rummaged through piles of paper, bookshelves, and even my laptop, searching for my East Indian mother’s channa and potato recipe and the one my black father had given me for his curried chicken.

Justin is fascinated that I know not just how to cook the food, but also the story of the spices. His childhood was nomadic, living in six different states and Scotland – wherever his father’s job took the family. His parents’ culinary ties to home countries had long-since faded. Instead, they adopted foods from the places they lived.

“We lost a lot of the ethnic dishes in our family because they weren’t kept up,” he says. “We’d go from one night eating roast beef to the next night eating spaghetti.”

“In a perfect world, we’d leave the chicken to marinate overnight, but we don’t have that luxury today,” I say.

I seal the container and pop it into the fridge to soak in the seasonings while I show Justin how I perfectly dice two tomatoes, potatoes and an onion.

We add curry, and oil to a big iron pot before throwing in the chicken piece by piece until they brown. When the onion and tomatoes go in, Justin admires the greens, yellows, reds, and whites. When the bay leaf, coconut milk, a dollop of plain yogurt and water follow suit, he inhales with a sigh.

“It’s time for the channa and potato,” I say.

I point to the can picked up in the ethnic food aisle. “They call them chick peas here.”

I put Justin to work dicing the onion and potatoes while I gather up the garlic, curry powder, and water, salt and pepper sauce.

“This is Tabasco sauce,” I say. “And this is Matouk’s Hot Pepper Sauce.”

Justin sautés the garlic and onion while I add a simple curry paste and the potatoes. After we add water, salt and the channa, I dip a spoon into the pot and predict it’ll need something for extra flavor. However, I let Justin figure out what. We settle on a tablespoon of rum, more curry powder, massala and a tiny bit of coconut milk and yogurt.

“It’s so cool how you’re, like, figuring it out as you go along,” he says. “How am I supposed to get this recipe? There is no recipe.”

A man and his food 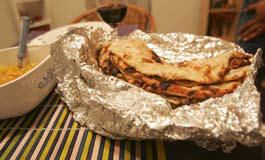 With the food placed on serving dishes on the dining room table, the roti or naan, a kind of Indian flatbread, rests heavily in foil. I might fancy myself a chef, but I admit to ordering the roti from a nearby Indian restaurant.

Without a tawah (a heavy, flat, round metal utensil) like the one my grandmother used to make roti on the stove almost daily, I was loath to do it in a frying pan.

I show Justin how to tear the roti, separate it down the middle and dip it into the food, gathering up chicken, channa or potato.

“It’s why women never stay with me,” he jokes. “I cook them curry and it’s so awful that they leave. My mom used ordinary seasonings like salt, pepper, thyme and basil. We certainly didn’t have curries and green seasoning.”

Sometimes his mother, Mary Ann, cooked pierogi, stuffed Slavic dumplings and she made a, “mean Cincy chili.” But for the most part, particularly after she began eating healthy, his was a food life of meatloaf, mashed potatoes, roast beef and Tex-Mex.

His childhood has infected him with the travel bug, and a deep curiosity about other cultures. He’s been to Haiti, the Philippines and London as a photojournalist, documenting the lives of others, immersing himself in the cultures – and the foods.

“That’s really what makes me happy. But this?” he says, pointing at an almost empty plate. “Oh boy!”