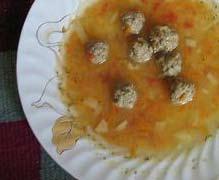 Soup, no matter how you make it, is always a welcome treat.

Gazpacho, Borscht, Won ton, Matzo ball, Minestrone. Soup has been at the world's table since, well, since before there were tables. Think prehistoric times. According to Andrew F. Smith, culinary history teacher at the New School University in Manhattan and author of several culinary histories, people consumed soup in the Mediterranean as far back as Neolithic times.

In 200 B.C., the Japanese began fermenting soybeans, producing what would eventually be refined into miso (soy) paste, used to make soup and other dishes popular around the world today. By the middle ages, Turks were using vegetables regularly in many of their soups, and after the Byzantine Empire fell, soups that originated in Central Asia made their way to Europe's tables.

By the mid-fifteenth century, onions, garlic, peas and beans were the most frequently used soup vegetables among peasants. While records show the European nobles favored soups with expensive seasonings, such as saffron, commoners primarily ate what was produced and available locally. These foods were often boiled to create flavorful broths that diners would drink directly from common bowls that they shared with others at the table.

Even children's literature gives us historic evidence of soup's universal nature. In the fable "Stone Soup," a weary traveler visits a village looking for food but none of the peasants wanted to give up their meager stores, so the stranger decides to make himself some "stone soup." Beginning with only a borrowed pot, water and a smooth stone over a fire in the center of town, he sits and stirs. As each curious villager walks by and asks about the soup, the stranger tells them how delicious stone soup is, adding that it would of course be better with a carrot, salt and pepper, some cabbage and the like. Suddenly eager to help, and happy at the opportunity to offer freely from their pantries, each of the villagers brings one thing to help "improve" the soup's flavor. As if by magic, bit by bit, and with the help of everyone in town, the stranger's pot fills with meat, vegetables and herbs until the soup becomes a feast for everyone to share. Some might say the moral of the story is, "it's all in how you spin your request." Others of course, feel it teaches us that with generosity, cooperation and an open mind, we can create great things.

Indeed, who of us cannot hearken back to our youth and recall a fond memory involving a bowl of soup? The healing powers of mom's hot chicken soup consumed while lying chilled and feverish in bed. The salty broth of your first bowl of matzo ball soup at your first Jewish friend's house, or the shark fin soup you tried at a Chinese wedding that you couldn't wait to tell your classmates about. The first time you heated your own can of tomato soup, making it "cream of tomato" by adding milk instead of water.

My parents grew up during World War II, when a pot of chicken soup was often on the stove because it was enough to feed my mother's poor family of 10. My father, the son of immigrants, still has cravings for eschle kufteh, a lamb and tomato paste-based soup with meatballs made from bulgur wheat and lamb and sprinkled with mint. It is an Armenian dish; my grandmother carried the recipe with her when she arrived in America as a teenager in 1932. In the 1960s, she shared it with my mother, then a young Irish bride, who fed it to our family as I was growing up. That recipe, stained and yellowed, now graces my kitchen files and when the soup's aroma fills my home, I am a child once again.

When I became a parent, I discovered a practical application for soup when my 16-month-old son taught me that "food jags" are a standard developmental stage for toddlers. The experts recommended offering him a wide variety of foods to let him discover what he liked. One night I gave him meatballs, noodles and peas. The peas disappeared, the meatballs received fair sampling, and he used the noodles to create ‘baby art' on the wall. "All right," I thought. "He likes peas." The next night it was peas, chicken and potatoes. The chicken went untouched, he ate most of the peas, and the potatoes made a ‘neat squishing sound and felt mushy between my fingers' (so said the look on his face after doing a number on them). The night after, I offered him peas, pork and noodles. My son looked at the plate, looked at me and shook his head.

"What? Not even the peas? But you love peas!" I reasoned with him. He replied by shoving the whole plate dangerously close to the edge of his highchair tray. Clearly, I needed a new approach. Knowing he had to be hungry, I decided to try an experiment. I made a bowl of watered-down chicken broth, and (out of his line of vision) dumped in the noodles, peas and pork. "How about some soup?" I offered, thinking myself excessively optimistic to believe he might fall for this. Two bowls later, he was burping and pointing to the fruit dish. Suddenly it seemed that the first moral of "Stone Soup" might have been correct, because after that I managed to get escarole, carrots, celery, chicken, egg and countless other foods into my son's belly, all through the magic of broth. My crowning moment as a soup mom was when his grandparents watched in amazement as my son ate tofu, scallions, seaweed and mushrooms stirred into a bowl of miso soup, made from the Japanese soybean paste discovered so long ago. While I haven't gotten him to try the eschle kufteh yet, I hold a mother's hope of his developing a love for that as well.

Thus, the torch is passed, and while it started out as a way to improve my son's diet, my hope is that miso – and other soups – will remain in his recipe box and be something he always equates with home. Maybe he'll even cook them up himself one day, as he gathers friends around his own table and tells them of his childhood soup memories.

Ingredients: Broth
Note: after making the broth, it must sit in refrigerator overnight before continuing with recipe.

In a 5-quart pot, place shoulder bones and cover with 3 quarts of water. Add onion, celery, ¼ tsp. each of garlic and onion powder and salt and pepper. Bring to a low boil and continue to boil for 2 hours. Allow to cool. Store, covered, overnight in refrigerator.

Skim fat from top of broth and discard. Return pot of soup to stove. Add additional ½ quart of water, lemon juice and tomato paste. Return soup to a boil. Add kufteh, reduce to simmer and simmer for 45 minutes.

Ladle soup into bowls and top with chopped fresh or dried mint.