How Do Native Americans Of Today Perceive The White Man? 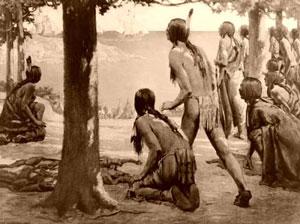 Do Native Americans still view the “white man” as the enemy that stole their land and freedom? Do they believe other races and ethnicities are guilty of these acts as well? Or do they feel that these different cultures and ethnicities have no bearing on how the whites took the country away from them?

This is an inherently tricky subject, as Native America today encompasses hundreds of different tribes with vastly diverse cultures, languages, and histories. One cannot even begin to speak for all Native Americans, since the tragedies of their histories all unfolded so differently. But it is fair to say that uniting all Native Americans is a distinct history of loss, which included both that of land and freedom to varying degrees.

Thus, different Native Americans are going to approach this query in distinctive ways. One Native American teacher working just outside the Navajo reservation in Flagstaff, AZ, explains the fundamental individuality that lies behind any answer to this query: “The fact will always remain that land was taken. As a result, physical freedom may have become restricted to a certain degree. The view of ‘white men’ as an enemy is an individual belief, not a collective belief of Native Americans. Those living on reservations may hold dearly to some beliefs, while those who have chosen to become educated and acclimated into the greater society, and now reside in that society, hold separate beliefs.”

However, she explains, this still doesn’t excuse what happened. “Yes, other races and ethnicities are guilty of taking land from other groups. But because other cultures and ethnicities have committed similar acts does not excuse the ‘white men’ or anyone else, as land grab always involves some stealth, subversion, and violence.”

Her colleague and another member of the Navajo tribe, who specializes in Navajo instruction for second and third grade students, dismisses any focus on the past in favor of her concerns about the future. “You can say that even today they are still ‘losing;’ losing their mother tongue, their indigenous language, and aspects of their culture and traditions, all while facing a continuous battle with poverty and alcoholism, and so many other challenges.”

She points out that how educationally Navajo students are consistently portrayed as falling behind on the achievement gap, as compared to their white peers, along with so many other blanket judgments. She feels that rather than judging the past, the hard realities of today need to be assessed and dealt with. “We are continuing to battle racism and prejudices even in the ‘free country,’ we live in today.”

Some have made their peace with the matter, quietly acknowledging their history while at the same time embracing the lessons to be found therein in order to move forward. Alana Sorenson, who is half Navajo and half Anglo, explains this as follows: “As an individual, I do not view the ‘white man’ as an enemy who stole my land and freedom. I see that statement as being true for my ancestors who had to face the conflicts firsthand. I have felt anger for what the Navajo people had to endure, and horrified at the injustice, and complete disrespect for humanity, treated as an animal rather than a person. But I cannot own the same experiences as my ancestors.”

In fact, her family chose to turn around the experiences of their ancestors, and focus the lessons of their history into the creation of cultural bridges of acceptance and understanding to foster a culturally diverse future. She recounts: “My grandmother, Roberta Blackgoat, a well-known resistor against forced relocation, and the injustices of indigenous people, had many sheepherders from all over the country and even from other countries come to live with her on the reservation. There they helped take care of the sheep and goats, hauled water, and learned about the Navajo culture. This is a gift that I will always hold dear, because I had the chance to learn about people from different places, to learn about the difficulties in life that they themselves, their families, and their cultures had to endure.”

She recalls one specific visitor who left a profound impression on her: “One lady from Germany stayed with my grandmother for many years in a row in the 1980s, before the Berlin Wall came down. She talked about what it was like to live in West Germany, and to have family in East Germany. Hearing her stories helped me come to the conclusion that it is the ‘government culture’ that my ancestors and grandmother were fighting against, not individual people or ethnicities.”

The history of Native Americans from every tribe is riddled with loss. How each individual chooses to come to terms with the reverberating effects of that loss is a path they must forge on their own. But one thing’s for certain: The continued losses that each culture still withstands must come to an end, for each tribe has much to contribute to our society as a whole.

Author Note: It’s important to note here that all persons interviewed for this piece are Native
Americans from the Southwest, and as such, may hold a different perspective than those from other geographical areas in the United States. Two of my three sources wished to remain anonymous, due to the highly charged political nature of this debate, and the importance of their remaining somewhat neutral in it due to their positions as teachers.