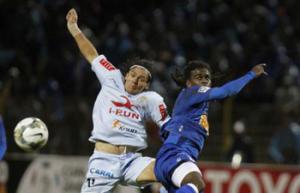 Brazilian player was taunted with racist monkey chants when he entered the game and each time he touched the ball. Photo Credit: wralsportsfan.com

Racism plagues Brazilian soccer in similar ways it has been a problem in European soccer or football as it is commonly referred. Racist chants are hurled even during some of the most important and prestigious championship games.

Most recently, Brazilian President Dilma Rousseff has given her support to a black Brazilian player who was racially abused by Peruvian fans recently during a Copa Libertadores match, the most important tournament in Latin American club football.

Brazilian player Tinga, playing for Cruzeiro, was taunted with monkey chants when he entered the match and each time he touched the ball. The match was played in Huancayo, Peru, against Peruvian club Real Garcilaso.

Rousseff, commenting on her Twitter feed, called the incident "sad" and said "sports can never serve as a stage for prejudice."

Racist behavior is a longstanding problem at matches in Europe, particularly in eastern and southern Europe. World governing body FIFA has sponsored anti-racism campaigns that have had modest levels of success.