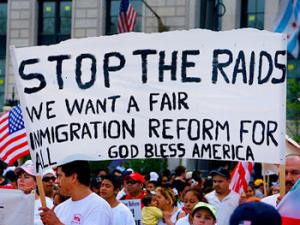 The pace of workplace raids in search of illegal immigrants in Arizona's most populous county has slowed, with only about half as many raids conducted in 2013 as the annual average in the previous five years.

The Arizona Republic reports that Maricopa County Sheriff Joe Arpaio's criminal-employment squad conducted six work-site raids in 2013, down from an average of nearly 14 in the previous five years.

Arpaio said any decrease is just a coincidence. Immigration-enforcement investigations can take a long time, he said. "It takes time to develop those cases," Arpaio said. "You can't go by every year. It may take a year to develop a case."

But immigration-rights activist Carlos Garcia suggested that the slower pace may be a result of tougher scrutiny from a case in which a judge has ruled that Arpaio's department engaged in racial profiling. "We were able to make it real public what was really going on," said Garcia, director of Puente Arizona, a grass-roots group.

Phoenix employment lawyer Julie Pace said Arpaio's office seems to be taking more care in its investigations. "They're trying to be more thoughtful about who they're arresting and why," Pace said. "They're not taking every employee anymore."

Since 2008, investigations conducted by Arpaio's office resulted in three employers being taken to court on civil allegations of illegal hiring, while several hundred employees living in the U.S. illegally have been arrested under a section of Arizona's employer-sanctions law that made it a felony to use fake or stolen IDs to get jobs.

He said he hopes to see more employers sanctioned and arrested in the future.

"We're going to continue to enforce the state law of identity theft, which happens to be a big problem today," Arpaio said.