Is the Ghetto Tracker App Racist?

A recent Reuters/Ipsos poll found that segregation is much more prevalent today than at any other time over the last decade and many fear with modern day creations such as the so-called "Ghetto Tracker App" there's little chance of conditions vastly improving any time soon.

While manufacturers tout the creation as merely a way to help wayward travelers track, identify and avoid dangerous neighborhoods, critics insists it's a callously coordinated effort by the haves to further distance themselves from the have nots by devising a code language all of their own to transmit subliminal messages to one another. So swift and forceful has been the backlash against the movement, the name of the device has already formally been changed to "Good Part of Town."

In addition to the name change, all mention of the word "ghetto" has been removed from the site of the company promoting the device and its homepage now features a caption of an ethnically diverse family, a far cry from the site's original advertisement which pictured a white family of four smiling alongside the app's promise to show users "which parts of town are safe and which ones are ghetto, and unsafe."

But branding and heartfelt sentiment can be two different things. And thus far, all the company's PR maneuvering has done little to alter the public's perception of the app or the motivations behind it. Critics yet slam it as a racist, classist tilt toward even greater separatism.

"I can't be held responsible for the assumptions people may make in regards to factors like race and income," the App's creator, who in a letter to Gawker Media, would only describe himself as a 30-something-year-old in Tallahassee, nonetheless argues "I've seen comments on blogs and in twitter that are trying to say this is encouraging racism or social stratification and that was never our intention. This was originally seriously developed as a travel tool and the name 'Ghetto Tracker' was meant to be something that people would remember." 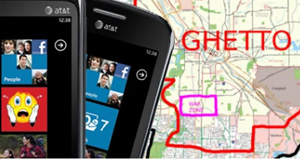 Consider that mission accomplished – at least the latter half of it. Gawker reported stern criticism of the device's original name have come from such varying sources as the family of woman who had been contained in an actual World War II ghetto to that of a man who grew up in a struggling neighborhood and went on to graduate from college and overcome his upbringing.

"It's pretty detrimental to society when we reinforce the idea that poor or crime-heavy areas are places to be categorically avoided or shamed," David Holmes wrote on PandoDaily. "As if to assume that every person who lives in an area with comparatively high crime or poverty is a criminal, or that these areas are devoid of culture or positivity."

Jim Thatcher, a geographer at Clark University worries society's increasing reliance on mobile technology opens the door for something he defines as "technological redlining," which he describes as the act of applications making it "easy to malign certain areas and even obliterate the possibility of our encountering certain people, places and events," even though they're presented to us as neutral or even chance occurrences.

"If I go online and look up crime reports for a certain area and decide that five murders on this street is too much for me." Thatcher concludes one is aware of their own motivation for staying away from that street. "On the other hand, when a mobile app performs a similar analysis for a user, the user cannot be aware of the motivations behind the final decision. Blind trust kicks in."