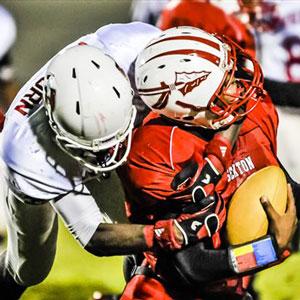 In this Oct. 12, 2012, photo, Everett's Rayshawn Wilborn, left, takes down Lansing Sexton quarterback Malick Mack for a loss during a football game in Lansing, Mich. Sexton’s use of an arrowhead emblem and the Big Reds mascot has drawn criticism from some as offensive to American Indians. But in 2013, the U.S. Education Department's Office of Civil Rights denied a complaint by the Michigan Department of Civil rights against the Sexton mascot and similar mascots in 35 state school districts. Photo Credit: AP/Lansing State Journal/Kevin W. Fowler

LANSING, Mich. (AP) - A federal agency dismissed a complaint seeking to ban the use of American Indian mascots and imagery in Michigan's K-12 schools, saying a state department cited no specific cases of harm to students in 35 districts.

The state Department of Civil Rights, which received notice of the ruling Friday, said Monday it was disappointed and considering whether to appeal or take other action. The agency takes issue with schools with mascots or nicknames such as the Redskins, Chiefs, Warriors, Indians, and Big Reds.

In denying the complaint, the U.S. Education Department's Office for Civil Rights said empirical evidence is not enough and it needs more details before it can find that a "racially hostile environment" exists.

"You did not provide ... any specific examples of race-based incidents nor identify any students or individuals who suffered specific harm because of the alleged discrimination at any of the named school districts," Catherine Criswell, director of Office for Civil Rights' Cleveland branch, wrote the state civil rights agency in a letter dated last Wednesday.

After filing the complaint in February, the department encountered criticism from Republican lawmakers who said it acted with no input from communities and argued the issue should be resolved locally without federal interference. Legislation introduced last month would make the state civil rights agency cover schools' expenses for changing mascots if the federal complaint succeeded.

"MDCR believes the evidence is clear that students are being hurt by the continued used of American Indian mascots and imagery. We will continue to look for ways to ensure all students are equally protected," the department said in a statement.

"Students in an American school who call themselves 'Redskins,' dress up like Indians, cheer using war chants, or wear uniforms emblazoned with cartoon Indians, may not intend to disavow history. But it certainly suggests they don't know much about the Dawes Act, the Indian Removal Act, the Trail of Tears, Wounded Knee, or Indian boarding schools," said the complaint, which affected 35 of roughly 550 districts statewide.

Recently, the NFL's Washington Redskins name has faced a new barrage of criticism for being offensive.

An Associated Press-GfK poll shows that nationally, "Redskins" still enjoys wide support. Nearly four in five Americans do not think the team should change its name, the survey found. Only 11 percent think a change is necessary, while 8 percent were not sure and 2 percent did not answer.