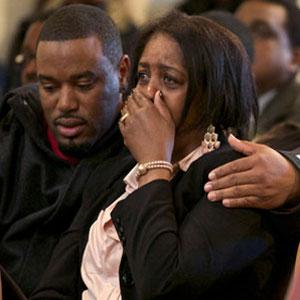 Shirley Chambers, whose four children all died from gun violence in Chicago, attends the funeral of her son. Photo Credit: John Gress/Reuters

Chicago violence targets youth, the underlining tragedy born of all the death and violence now ravaging the youth and streets and of the nation’s second city solemnly revolves around the realization that soon there may be no next generation to save.

Not only did Chicago lead the nation in homicides in 2012, over the last several years, the epidemic degenerated to the point that it now callously stands as a symbol of the daily and deadly war waged among its young, and in most cases, most vulnerable.

In addition, nearly 60 percent all those convicted of such crimes in 2011 were also under that age, even though, according to 2011 Census estimates that demographic composes just one-third of the city’s overall population.

Equally startling, yet perhaps not that surprisingly, all 21 of the city’s leading communities for youth homicide — overall more than 80 percent — border a majority of black or Latino neighborhoods, areas long and systematically dogged by heightened poverty levels, lingering unemployment and vastly disadvantaged educational opportunities. 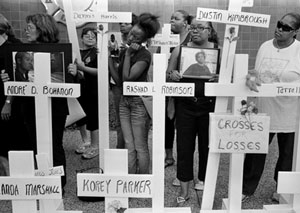 It’s all in stark contrast to the scene emanating from a stretch of as many as 22 far more affluent cross-city neighborhoods, converted sanctuaries where no more than one youth killing each occurred over that same four-year period.

Despite what city officials tout as their best laid plans in alleviating all the carnage and disproportionate numbers, the handcuffing restraints of joblessness, dilapidation, and overall instability continue to yield crippling effects.

As a community activist, 70-year-old Wiley Rogers spent his life pondering such anomalies. He readily speaks of the cause and effect dilemma he sees plaguing his Woodlawn neighborhood.

“What is the mindset of the person when the future holds no hope,” he told The Chicago Reporter. “Historically, every generation has had the promise and hope of the future out there. These kids don’t have that. What matters is today. It leads to this horrible fatalism, where life ain’t worth living anymore.”

There is so much that can be said when we look at statistics like the ones presented in this article. I have often heard many negative things about the crime rate in chicago and how people should not raise families there because it is so unsafe. It saddens me to think that this is such a widespread notion and that there should be some basic steps to taking a control and helping the community be more safe. I know that putting the emphasis on people of color or minority people does not help the situation. I feel like they should be changing the way they view minorities and trying to solve it without the slander of subjecting the minorities to what their future "will be" because of where they live.

The crime level in Chicago regarding the youth has reached a level of all time high of shootings death throughout the United States. The city of Chicago has been in the news channel for the past year. In the first month of the year there has been already forty-two homicides. Where do politics step in establish control gun laws? What police tactics can be used in order to eliminate a crime waiting to happen? Where are the parents of persons under 21 who mainly commit most of these crimes? This is a huge issue and it is not getting any better. There are many minorities leader who had fought and is still fighting for equality; yet we are the main ones killing each other. I am not excluding whites from committing crimes. I am an minority myself and with the reporting’s being mainly of minority groups it is quite heart breaking.