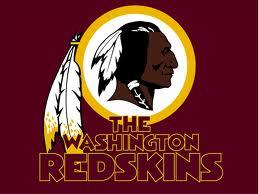 Washington Redskins name deemed to be a racial slur at a daylong symposium at the Smithsonian. Photo Credit: wtvr.com

WASHINGTON (AP) - Hurtful names and racial stereotypes of all types were discussed and dissected Thursday in a daylong symposium at the Smithsonian, and the Washington Redskins were at the top of the list for nearly all those who spoke.

"I can only imagine what it would be like to be at a football game at FedEx Field in a crowd of close to 90,000, all screaming at the top of their lungs, when what they are screaming is a racial slur," said Judith Bartnoff, a deputy presiding judge in District of Columbia Superior Court.

By the time the day was over, they had a convert.

Unaware of what the presentation was all about, Andre Holland wore his burgundy and gold Redskins hat, ear muffs and key chain to the National Museum of the American Indian. He was on a field trip with his Sports in America class from Anne Arundel Community College.

When the sessions ended, the 20-year-old student had removed the hat and disavowed the nickname of his lifelong favorite NFL team, having been persuaded that it's as racist as the worst names he might be called as an African-American.

"I really don't feel right wearing this stuff now," Holland said. "And now I can't even say 'HTTR' - which is 'Hail to the Redskins' - because that's chanting something racist. I'm going to be a fan of Washington - a 'Washington football team.' Not the 'Washington Redskins.'"

Panelists and audience members explained why they felt the name was offensive and offered all sorts of ideas - including a protest at training camp and the need to get franchise quarterback Robert Griffin III to speak out - that might persuade team owner Dan Snyder that a change is needed.

Holland was convinced. He was one of the few in the partisan crowd who showed up liking the name. As he listened, he started tweeting - and he said the feedback he got opened his eyes, along the panels' presentations about the history of insensitive mascots such as "Little Red," who used to dance at University of Oklahoma games. Also under scrutiny was a red-skinned image named "Mr. Yakoo" used by the North Quincy Red Raiders at a high school in Massachusetts.

Near the end of the final session, Holland went to the microphone and compared Redskins to the n-word, then turned around and gave a hug to the Native American standing next in line.

"A serious day for me," Holland said.

There has been momentum toward changing names deemed offensive, although Snyder has been adamant about that he's not going to join the trend. On Tuesday, Washington Mayor Vincent Gray specifically avoided saying the name of franchise in his State of the District speech and instead referred to "our Washington football team."

In 2005, the NCAA announced it would ban the use of American Indian imagery and nicknames at postseason tournaments. Some schools have since been granted exceptions with the support of tribes, such as the Florida State Seminoles.

The latest to make the switch are the students at Cooperstown high school in upstate New York, who voted this week to ditch their "Redskins" nickname. The school, located in the hometown of "The Last of the Mohicans" author James Fenimore Cooper, is considering "Deerslayers," ''Hawkeyes" and "Pathfinders" as alternatives.

Suzan Shown Harjo, president of the Washington-based Morning Star Institute, an advocacy group, said there are some 900 troublesome nicknames and mascots across the country, down from a peak of more than 3,000 when "Little Red" was taken off the field in the early 1970s.

The best chance to change Snyder's mind would likely be to hit him in the pocketbook by getting the U.S. Patent and Trademark Office to void the Redskins trademark. A group of American Indians made progress on that front during a 17-year court battle that came to a halt in 2009 because it was ruled that the plaintiffs waited too long to file their original case. There is now a new case filed by younger plaintiffs that is due for a hearing next month.