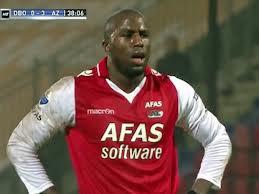 Altidore, who is black, said he had never faced such serious abuse from the stands, but shrugged it off after the match, which his team won 5-0.

"There's nothing I can do about it," he told Dutch television's Eredivisie Live. "All I can do is pray for them and hope they can become better people."

The racism was all the more shocking as it came just weeks after Dutch football authorities pleaded for more respect at all levels of the game following the death of a linesman after he was attacked by players after a match between two youth teams near Amsterdam in December.

"It's a bit disappointing that these things still happen in this time that we're in," Altidore said. "But what you going to do? You just hope these people can find a way to improve themselves. You can only pray for them."

The 23-year-old striker, one of the Dutch league's top marksmen this season, focused on the need for education.

"At the end of the day it's still alive, racism. All we can do now is try to educate ourselves, the young kids coming up, to be better than that," he said.

Den Bosch repeatedly urged its fans to halt the monkey chants, to no avail.

"Obviously, we hear about those things and (we're) not pleased with it at all," U.S. coach Jurgen Klinsmann said. "When that type of stuff happens, no matter where in the world you go, you don't want to see it. (Altidore) told me about it."

The club's director, Peter Bijvelds, blamed "malicious supporters making a scandalous mess" of the evening. He said Den Bosch, AZ and the referee considered abandoning the match, but decided against it. 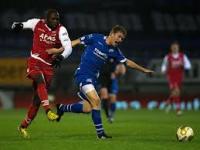 "We can't deny that, certainly when we play top matches ... we have a structural problem with a group of people who ruin things," Bijvelds told Dutch radio. "We have to crack down on it."

According to AZ's official twitter feed, referee Reinold Wiedemeijer wanted to stop the match in the first half "because of jungle sounds chanted at Altidore" but AZ players, including Altidore, persuaded him not to.

Wiedemeijer halted play briefly in the second half because of fans throwing balls of ice at his linesmen, according to the Dutch Eredivisie official Twitter feed and Dutch news website Nu.nl.

Altidore scored one goal as AZ overpowered Den Bosch, which finished with nine men after having two players sent off.

"It is terribly sad that this can happen for those involved and for lovers of football in the Netherlands," AZ's director of football, Earnie Stewart, a former U.S. midfielder, told Eredivisie Live at halftime.

"You hear that and wonder what on earth is going on," he said.