Closing Cultural Divides: One Child At A Time 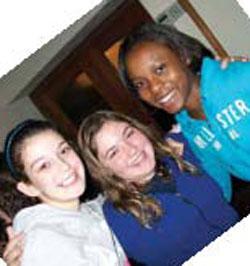 Sharing experiences with others brings home the benefit of multiethnic cultures.

“It takes a village to raise a child.”

This folkloric nugget of wisdom can be turned around into a different nugget of wisdom: Sometimes it takes a child to raise the village. In the case of Salva Dut, one of the original Lost Boys of the Sudan, he is raising his village out of the mire of disease, poverty, and limited education.

A quarter-century ago, at age 11, Salva Dut, a member of the Dinka tribe, lived in a small village in southwestern Sudan. When civil war erupted in his country, Dut fled for his life to a refugee camp in Ethiopia. As a teen, he led 1500 other lost boys hundreds of miles through the desert to another camp in Kenya. Now a citizen of the United States, Dut devotes his life to improving the lot of the Sudan villagers. He spends half the year raising funds in America, and the other half building wells in his native land.

Dut’s goal is to educate Americans about the Sudan, while elevating the standard of living in his homeland. He’s reaching that goal by virtue of his own education. Upon his arrival in Penfield, N.Y., he concentrated on learning English, earned his GED, and then an Associate’s Degree in Business. He also has a Bachelor’s Degree in International Business from the State University of New York.

The process of acclimation he has gone through is one shared by a number of students at Our Lady of Mercy High School in Rochester, N.Y. Among the students are several Turkish refugees from Russia. Five of the students are part of the Aliyeva families. These teen-aged sisters and cousins have made numerous overtures to learn about other cultures and to share their own heritage with their classmates. Here, they discuss their efforts to close the gaps that separate races and cultures: 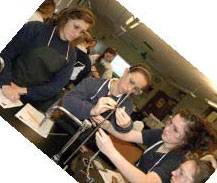 Amina: “I talked about my religion in theology class and the Ramadan holiday.”

Elmira: “I attended the Catholic funeral of my friend. I observed the mass, the family reception, and the burial. Also, my friend taught me the wedding traditions of American girls and boys.”

Leyla: “As Muslims, we celebrate Ramadan, the holiest month in the Islamic calendar. Last year during this special day, I invited my friends to school to learn more about my culture. My family served them Turkish and Russian food, and asked them to take some back to their own families. It was the first time my American friends had been in the house of someone from a different culture.”

Nasiba: “I pray five times a day. I give God one hour a day in prayer, and He gives me another 23. My prayers show other people how important prayer is in my culture.”

Sevila: “I am Ahiska Turkish. One thing I did to help others learn about my culture was writing a paper for my English class. In it, I discussed a poem by Rumi. My understanding of the poem was different from my classmates’ understanding. Another thing I did was spend an evening discussing marriage customs with my math professor, who is from the Congo.”

Another Mercy student, Esmiranda Beha of Kosovo, feels strongly that teaching children to respect other cultures should start much earlier than it does already. She adds, “Talking about my culture to teachers and friends, dancing traditional Albanian dances at my school, and participating in different school and community events show others what my culture is like. I believe that everything I have done has helped teach people that my culture is just as beautiful and great as every other culture they know about.”

In a similar effort to unite rather than divide, the Irish Children’s Program seeks to blur the edges of the religious divide that separates Irish children. Former board member, Suzanne Roscoe, attests to the value of sponsoring American visits for an equal number of Catholic and Protestant children each summer. Their aim of “peace through understanding” is realized by matching the Irish children with families who practice a different religion than the child.

For the entire month of July, children from different backgrounds meet, engage in team building, and participate in various activities — all in an effort to break down the barriers that separate them in their communities.

Additionally, the program strives to bring to light the awareness that Irish similarities are much greater than religious differences. “Peace through understanding” is the ultimate goal.

Individual teachers do their part as well. While on her leave of absence, elementary school teacher, Shelley Gray, created a new curriculum for students at Sigurbjorg Stefansson Easly School in Gimli, Manitoba, Canada, titled, “Being Different is Being Special.” The material is designed to introduce young students to the idea that our differences make us special, regardless of whether those differences are racial, family-related, or related to personal interests.

Organizational psychologist, and author of “Wander Woman: How High-Achieving Women Find Contentment and Direction and Outsmart Your Brain,” Dr. Marcia Reynolds, appreciates the value of curiosity. She says it is important to provide a macrocosmic view of differences for learners in the workplace.

“Whether you are working with a team or an entire organization, there is a tendency to look at differences as deficiencies,” she explains. “Instead of defining people by their gender, age, or culture, it is important to seek out who they are as individuals with something great to give. Discover what specific strengths, personality attributes, powerful emotions, work or life values, and unique perspectives they have to offer. Curiosity is a great team builder.”

She adds that the power of individuals who explore curiosities, who share, who teach, and who learn is multiplicative. Like nothing else, such power narrows the gaps between us, and effects harmony among us.