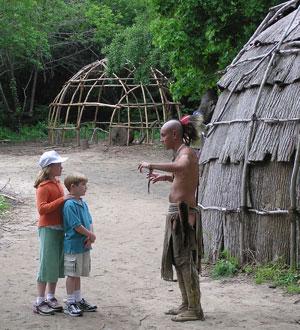 “Beginning in 2006, this cultural site truly became a bi-cultural institution equally incorporating, both Native and European settler experiences throughout the exhibits and activities,” says Tommy Turner, instructor at the center.

The Wampanoag Nation’s numbers peaked at around 30,000 in the early 1600s, occupying 67 villages in what are now eastern Rhode Island and southeastern Massachusetts. 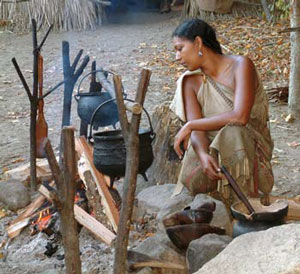 Today, however, roughly 4,000 to 5,000 Wampanoag live within this same region. Built on an archaeological site where artifacts and postholes dating back 8,000 years were discovered, the Wampanoag Homesite was recreated according to a Plymouth Colony’s early histories, referencing Hobbamock, a Wampanoag warrior.

Native tribal members dress in period deerskin and serve as interpreters, who explain the 17th Century Wampanoag culture in modern-day English. In the center garden, a climbing platform that serves the dual purpose of a child’s jungle gym, and scarecrow, guard traditional mounds of corn, beans, and squash.

Stationed inside the fully furnished wetus (houses made from cattail reeds), Natives educate visitors as to why homes are built in rounded shapes. In addition to representing the seasons and cyclical nature of life, they also maximize heating and cooling efficiency.

According to Randy Joseph, Wampanoag Education Center Manager, tribal members passed down the traditional skills and knowledge through oral tradition, with archival documents collected by director Henry Hornblower, from Wampanoag natives in the 1970a. 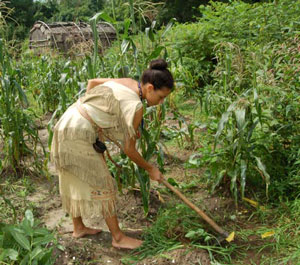 Some traditions are taught to visitors, and they can help build a mishoon (boat), which requires hollowing out the core of a pine log by burning it, and scraping the ash with stone tools. Or learning how to twine, a type of finger weaving used to create storage bags and fish nets, are other customs visitors often enjoy. And if you work up an appetite, don’t worry because Sobaheg, a traditional stew made of kidney beans, course grits, green beans, and winter squash thickened with sunflower flour is usually simmering over the fire, and ready for sampling.

Other Wampanoag onsite exhibits include; Thanksgiving: Memory, Myth & Meaning. A multimedia exhibit utilizing historical documents, film, print ads, and personal accounts to exposes the myths perpetrated about Thanksgiving. A majority of the photographic material comes from a two-day film shoot held in October 2000, involving 100 Native Wampanoag people and several other Nations. Their portrayal helps visitors learn that the Wampanoag were neither savage interlopers nor peaceable handmaidens of the settlers.

“Tribal members tell the story of who we are,” Joseph says. “The Wampanoag never vanished, we are still here in modern society.”

I am surprised when I see people live the way that the Wampanoag tribe lives in this century. The Wampanoag people still live the same lives that their ancestors did. They still wear the same type of deer skin dresses and still do their duties. They also cook the same traditional soups. They welcome visitors and tourists and also teach them the Wampanoag’s living styles. I would like to travel and visit the Wampanoag tribe and learn their traditions because I find it very interesting. I want to learn how they see people that live the way we do in modern society.