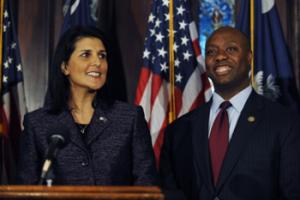 Tim Scott had just been elected to a second U.S. House term when Gov. Nikki Haley appointed him in 2012 after Jim DeMint resigned. When he took office in early 2013, Scott became the Senate's only black member and the first black senator ever from South Carolina. This November's election is for the two years that remain in DeMint's term. Photo Credit: the blaze.com

A black Republican U. S. Senator from South Carolina, should he be elected in the November mid-term election, will most certainly make history, signaling that the south and the country continues to make progress when it comes to race and politics. Having handily beaten his GOP challenger, U.S. Sen. Tim Scott is now poised to focus on his general election campaign, one that will likely make history.

Should he win his November contest, as is expected, Scott would become the first black senator ever elected in South Carolina's history. He would also be the state's first black candidate elected in any statewide contest since Reconstruction.

Scott had just been elected to a second U.S. House term when Gov. Nikki Haley appointed him in 2012 after Jim DeMint resigned. When he took office in early 2013, Scott became the Senate's only black member and the first black senator ever from South Carolina. This November's election is for the two years that remain in DeMint's term.

Scott has repeatedly downplayed the significance, if any, of his race, a theme he reiterated at a victory rally Tuesday night in North Charleston.

"What voters are looking for today are people who represent their values and not their pigmentation and complexion," Scott said. "My goal is not to focus on my face or anyone's race, but focus on the issues that are going to resonate in my heart and with South Carolinians." 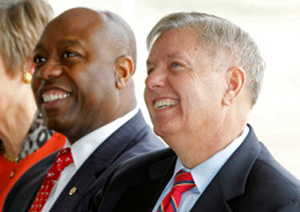 Scott has been vocal about reforming health care for veterans, traveling across the state last week to hear concerns in the wake of Veterans Affairs Secretary Eric Shinseki's resignation. He also advocates streamlining federal job-training programs and supports a Savannah River Site nuclear fuel facility that the Obama administration has says it wants to shutter.

Coming off a victory over six tea party challengers in his own primary, U.S. Sen. Lindsey Graham said Wednesday that he saw Scott as the future of the Republican Party. "Our party in South Carolina has decided to serve people rather than just be blind ideologues," Graham said during an appearance with Scott and Haley. "In Tim Scott we have the future of conservatives all over the country. ... Tim has made history in so many different ways."

Gibbs Knotts, a political scientist at the College of Charleston, said Scott could be positioned to play a role in changing the way voters view the Republican Party. "Tim Scott has an opportunity to try to change some of the dynamics in American politics and make the Republican Party a party that reaches out to African-Americans and potentially becomes more attractive to African-Americans," Knotts said. 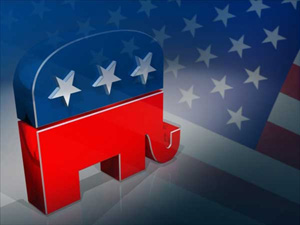 Nationwide, Republicans looking to hang onto their majority in the House and reclaim a majority in the Senate are struggling to recruit non-white voters. It's a crucial priority for a party whose base is mostly white, given that racial and ethnic minorities are expected to make up a majority of Americans within about 30 years. Black voters, for example, have been a reliably Democratic voting bloc since the civil rights era.

About 28 percent of South Carolina voters are black, according to the U.S. Census Bureau, and 68 percent are white. But, Knotts said, Scott will need to address issues that appeal to black voters if he wants to pick off those who traditionally choose Democratic candidates.

Some black voters may align with the GOP on social issues like gay rights and abortion rights, though they may lean Democratic on welfare programs and economic issues.

"Partisan identification is the strongest predictor of someone's vote," Knotts said. "It doesn't have to be all or nothing. There may be some areas where Tim Scott can reach across the aisle, a la Lindsey Graham, and form partnerships on some issues where he can help deal with some policy issues that would be beneficial to African-Americans but also keep his Republican base."

Still, Scott remains a favorite to win in this heavily Republican state.

Dickerson did not respond to messages Wednesday, but she has previously said she'd mount a serious campaign against Scott, although her fundraising ability has yet to be seen.

As of late May, federal filings showed the Democrat with less than $6,000 cash on hand. Scott had nearly $3.9 million on hand, and the incumbent has aired television ads in heavy rotation, focusing on his ability to connect with "everyday people."

Seanna Adcox in Columbia and Bruce Smith in North Charleston contributed to this report.