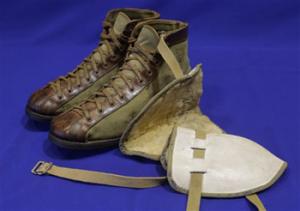 Vintage leather and canvas basketball shoes and a set of knee pads are shown as part of an exhibit entitled "The Black Fives," at the New-York Historical Society in New York. Dozens of teams flourished between 1904 and 1950 in what became known as the Black Fives Era, an often-overlooked piece of black history that is the subject of an exhibition opening at the New-York Historical Society on March 14. Photo credit: AP Photo/Frank Franklin II

Just a few short years after the invention of "Basket Ball", black players formed their own segregrated teams and leagues, which eventually created a barnstorming circuit featuruing such teams as the New York Renaissance and the Harlem Globetrotters.

Dozens of teams flourished between 1904 and 1950 in what became known as the Black Fives Era, an often-overlooked piece of black history that is the subject of an exhibition opening at the New-York Historical Society on March 14.

Among the more intriguing items are canvas shoes, buckle-front shorts and a pair of leather-and-sheepskin kneepads, used not only to prevent injuries from rough play but from the protruding nails, splinters and uneven planking of early basketball floors.

"Prior to 1950, it was a rougher game … if you could elbow a guy in the stomach and get away with it, you did," said Susan Rayl, author of "The New York Renaissance Professional Black Basketball Team: 1923-1950."

When basketball was invented in 1891, teams were referred to as "fives" for their five starting players. Wider exposure to the game came in 1904 when Edwin Henderson, a physical education instructor who learned the sport while at Harvard University, introduced it to black students in Washington, D.C.'s segregated school system. All-black teams initially were sponsored by black YMCAs, athletic clubs, churches and schools as a way to keep young men occupied during winter months. 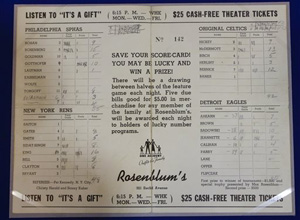 It was strictly amateur at first, and the idea of getting paid to play "was considered practically blasphemous," said Claude Johnson, the foundation's founder and the exhibition's guest curator.

But that gradually began to change in the 1910s when players and promoters of teams in New York, Washington, Chicago, Pittsburgh and other large cities saw the benefits of sharing gate receipts, and staging lucrative games against all-white teams.

One of the biggest such contests of the era was the inaugural 1939 World Professional Basketball Tournament, in which the New York Renaissance, aka Rens, defeated the Oshkosh All-Stars, the champions of the whites-only National Basketball League.

The Black Fives Era spanned both some of the most tumultuous and colorful periods of American history, including Prohibition, the Great Depression and two World Wars. It also coincided with the popularity of black music - ragtime, jazz and blues – that spurred a dance craze and ballroom construction boom.

Shut out of all-white gymnasiums, black players and their promoters quickly made these dance halls a basketball destination, too.

"Enterprising black basketball promoters would arrange double dates, where the band or act would play before the game and during halftime and after the game with dancing," Johnson said. Early game ads all had the headline: "Basket Ball and Dance."

The history of the Black Fives has been overshadowed by the formation of the National Basketball Association in 1949 and its racial integration the next season with Earl Lloyd and three other black players. Today, African-Americans comprise 76 percent of NBA players.

"It became obscured by the existence of the league itself," Johnson said. "It wasn't intentional. It just kind of disappeared."

Even ancestors of some of the players knew little about the era until very recently. Gail Lumet Buckley, the daughter of singing great Lena Horne, said she first learned of the Black Fives while writing "The Hornes: An American Family." She came across a medallion signifying her grandfather, Edwin Horne, as a player for the first formally organized independent all-black team, the Smart Set Athletic Club of Brooklyn.

New York State Education Commissioner John King, whose uncle William "Dolly" King signed a contract with the Rens in the early 1940s, said the exhibition is a great way to learn not only about the history of basketball "but also the history of race in America and … the transformation that happened in the United States in the course of the 20th century."