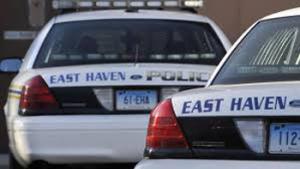 Police treatment of Latinos in East Haven has been under federal scrutiny since 2009, when the Department of Justice launched a civil rights probe that found a pattern of discrimination and biased policing in the town, which is more than 88 percent white, according to the Census. Photo Credit: nbcconnecticut.com

The violation of Civil Rights of Latinos, by a police officer, has resulted in the longest sentence to be issued after a federal investigation of racist practices by a mostly white police department.

A former East Haven police officer was ordered Thursday to spend five years in prison for violating the civil rights of Latinos, the longest sentence to date stemming from a federal investigation of racism among police in the mostly white New Haven suburb.

Dennis Spaulding, 30, was among four white officers convicted in the case, and the third to be sentenced.

He did not apologize during his sentencing, but instead defended his actions as the colorblind enforcement of motor vehicle laws during an investigation of massive license plate fraud. He said those involved in the fraud just happened to be those who lived in the U.S. illegally, who would pay up to $1,500 for phony vehicle registrations and insurance cards.

"I am not a racist, nor do I use racist language," he said. But Judge Alvin Thompson said Spaulding could not explain away the abuse of Latinos, including the false arrest and beating of a restaurant owner who was taking pictures to document the police surveillance of his business.

Moises Marin, who owned the La Bamba restaurant, also spoke at the hearing. He detailed how he was attacked by Spaulding in the parking lot of the restaurant in 2008 and laughed at by other officers when he was brought handcuffed into police department, suffering from a broken jaw and other injuries.

"Right there I felt the racism and hatred," he said through an interpreter. "I know that Dennis Spaulding's message for me and my family and my customers was to get out," he added.

Police treatment of Latinos in East Haven has been under federal scrutiny since 2009, when the Department of Justice launched a civil rights probe that found a pattern of discrimination and biased policing in the town, which is more than 88 percent white, according to the Census. 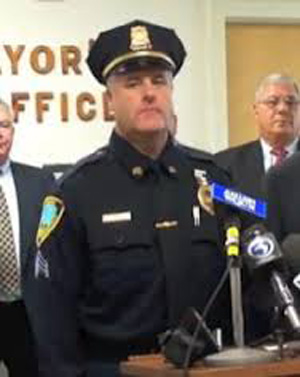 The officers falsified arrest reports, unlawfully searched Latino businesses, harassed and intimidated people, including advocates, witnesses and other officers who tried to investigate or report their misconduct or abuse, prosecutors said.

Spaulding's attorney, Frank Riccio II, suggested the case against his client was tainted by highly publicized claims of racism against East Haven police that dated back to the 1997 shooting of a black man by a white police officer. "The problems with the East Haven Police Department were bigger than one person," he said.

But the culture of the department does not excuse the individual actions of officers such as Spaulding, Assistant U.S. Attorney Krishina Patel said. "It is that much worse that what they did is create new wrongs against a new immigrant community," she said.

Spaulding was convicted in October of conspiring to violate the constitutional rights of Hispanics, making false arrests and using unreasonable force.

David Cari, another officer convicted during that trial, was sentenced Tuesday to two and a half years in prison on similar charges.

Two other officers pleaded guilty to lesser charges. Officer Jason Zullo received a two-year sentence in December after pleading guilty to obstruction of justice. Former Sgt. John Miller is to be sentenced next month.

In addition to his prison sentence, Spaulding also was ordered to pay more than $6,500 in restitution to Marin, including his medical bill.