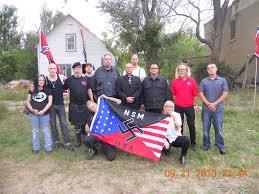 A judge has set bail at $1 million cash for Craig Cobb, a white supremacist who is accused of terrorizing citizens in Leith, North Dakota, a small town that he wants to transform into an Aryan enclave. Photo Credit: soulsofblackwomen.com

A white supremacist accuse of terrorizing a small town in southwestern North Dakota had his bail set at $1 million cash on Friday by a Bismarck judge.

Craig Cobb, 62, is being held in the Stanton jail on seven felony charges. He is accused of terrorizing residents while on an armed patrol of his property in Leith. If convicted, he could face up to 35 years in prison.

The North Dakota Supreme Court ruled earlier this week that there was no evidence to support holding Cobb without bail, ruling that a reasonable bond needed to be set by Friday.

Cobb, who also is wanted in Canada on a hate crime charge, moved to Leith about 1 1/2 years ago. He bought land and a house, and encouraged others with similar views to join him to create a voting majority in the community of 23 residents.

But he has clashed with locals, who want him to leave. Prosecutors allege he used a gun to terrorize residents on Nov. 16. Cobb said he was patrolling because of violence and harassment directed at him.

A man who joined Cobb in Leith, Kynan Dutton, also was charged with seven counts of terrorizing. His bail has been set at $50,000. Cobb's court-appointed attorney, Ryan Heintz, also had asked for $50,000 bond. 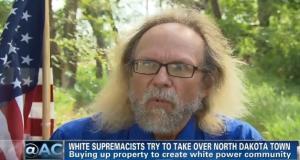 "It is of significant concern to the court that you fled another country to avoid prosecution," Feland told a handcuffed Cobb, who appeared by video from the Mercer County Courthouse.

Authorities said Cobb can't be extradited to Canada because the charge against him there doesn't exist under U.S. law.

Feland ordered Cobb to stay away from Leith unless escorted by authorities. He also was ordered to have no contact with the seven citizens he is accused of terrorizing. Assistant Attorney General Jonathan Byers said photos and video show Cobb confronting citizens with a "long-barrel gun" with his "finger on the trigger."

"Were it not for the intervention of authorities, something bad was going to happen," Byers told the judge.

Heintz said he did not dispute the severity of the charges, but he said the allegations are under debate. He is Cobb's fourth attorney; three other public defenders consecutively withdrew from the case.

A preliminary hearing is set for Jan. 13.

I wish they would go into more detail about the charges. If he is threatening people, why was he not arrested for this before now? They also do not explain where he was; if he was on his property I see nothing wrong with that. If he was not on his property then I understand him being arrested. They also do not specify if he physically harmed someone. There has to be something more wrong with him than him just being racist. He has been through three other attorneys which makes me think that there is no way for him to get out of this.