Black Men Born Today Will Be Imprisoned At Higher Rate 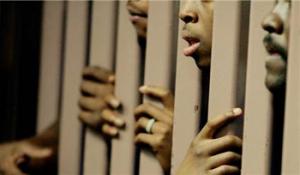 One in every three black males born today can expect to be imprisoned at some point in their life, compared to just one in every 17 white males. Photo Credit: brandnewz.com

A new Sentencing Project study concludes one in every three black males born today can expect to be imprisoned at some point in their life, compared to just one in every 17 white males.

Sentencing Project officials recently submitted their report to the U.N. Human Rights Committee in advance of the U.N.'s review of American compliance with the International Covenant on Civil and Political Rights. 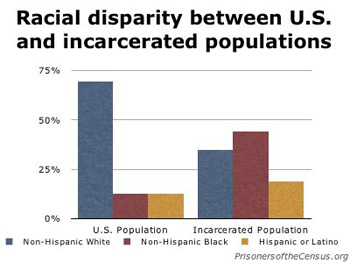 In light of such staggering findings, the report concludes the U.S. government has employed mass incarceration as a means of further suppressing its minority populous. Researchers write "the government has both fostered and perpetuated racial inequalities in clear violation of its obligations under the International Covenant on Civil and Political Rights as well as other international agreements." 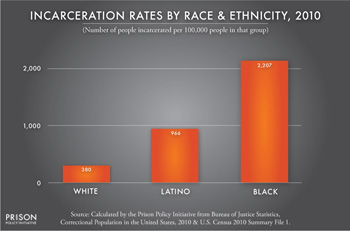 To bolster their conclusions, researchers point to Justice Department data that finds between 1980 and 2010 police arrested black youths for drug crimes at a rate twice greater than that of whites, even though a 2012 National Institute on Drug Abuse study found white high-school students were significantly more likely to have abused drugs than their black, same-aged classmates.

Researchers add blacks are also far more likely to be stopped and confronted by police while driving than whites. "Since the nature of law enforcement frequently requires police officers to make snap judgments about the danger posed by suspects and the criminal nature of their activity, subconscious racial association's influence the way officers perform their jobs," the report contends. 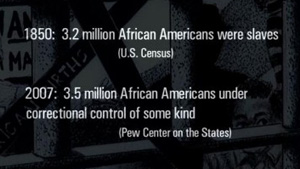 And the disparities don't end there. Because blacks and Latinos are generally poorer than whites, they are far more likely to rely on court-appointed legal representation, or attorneys who typically work for agencies that are underfunded and understaffed.

As recently as 2012, more than 70 percent of all public defender offices reported that they were struggling to come up with sufficient funding and, thus, maintain their level of services to the poor. By last March, the problem was deemed so bad that Attorney General Eric Holder declared the entire public defense system to be in a "state of crisis."