Cool Papa Bell: The Fastest Man to Ever Play Baseball 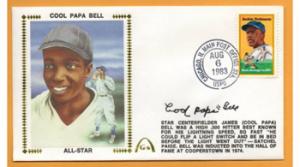 Cool Papa Bell (James Thomas Bell) was inducted into the Baseball Hall of Fame in 1974. He died in 1991. Photo Credit: gatewaystamp.com

With the World Series dominating sports news this week and the next, it seems a good time to talk about a man who many consider the fastest baseball player who ever lived: Cool Papa Bell.

Unfortunately, because of the color line, Bell never got a chance to play professional baseball. But the stories about him during his Negro Leagues career are some of the best you'll find about any player.

James Thomas Bell was born on May 17, 1903, in Starkville, Mississippi. Bell's mother worked as a sharecropper, but Bell never had any interest in farming or working the soil. All he cared about was baseball.

In 1920 Bell lefty Mississippi for St. Louis, Missouri. The plan was for him to go to night school, but instead Bell played baseball constantly. Eventually he joined his brothers on an amateur team. That led him to sign with the St. Louis Stars of the Negro Leagues in 1922. Ironically, this great centerfielder initially signed as a pitcher.

Indeed, it was as a pitcher that Bell got his legendary nickname. After winning a game and striking out the feared hitter Oscar Charleston, his teammates teased that the young rookie was "cool" under pressure. Manager Bill Gatewood added "Papa" to it, and Cool Papa Bell was born. 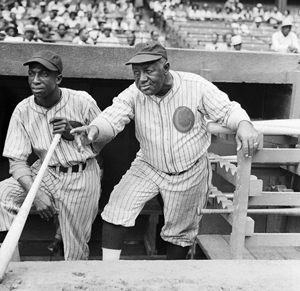 With his blazing speed, Bell soon abandoned the mound for center field. Bell's speed gave rise to countless stories. The most incredible was that he hit a slow grounder past the pitcher and was hit by the ball as he slid into second base! However, for a man who was clocked running around the bases in an astounding 12 seconds, this seemed almost routine.

The funniest story was the time Bell checked into a hotel room before roommate Satchel Paige and noticed that there was a delay from when he turned off the light switch to when the light actually went off. When Paige came in, Bell bet him that he was so fast that he could turn off the light switch and get into bed before the light went out. An amused Paige took the bet, and Bell proceeded to do it numerous times before Paige got wise.

Paige said of Bell: "If Cool Papa had known about colleges, or if colleges had known about Cool Papa, Jesse Owens [the famous Olympic sprinter] would have looked like he was walking." Owens refused numerous invitations to race against Bell. One of Bell's trademarks was stealing two bases on one pitch. One season he was credited with stealing 175 bases. He was sometimes described as the only man who could steal first base.

Unfortunately, Bell was denied his chance to play in the major leagues. He was too old when Jackie Robinson finally broke the color line in 1947. But Bell was never bitter. "They say that I was born too soon. I say the doors were opened too late," he said.