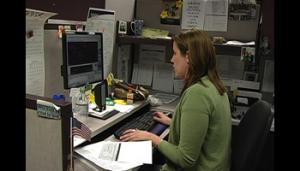 A federal civil rights complaint has been filed against the state of New Mexico alleging that the online filing system discriminates against non-English speaking applicants. Photo Credit: labor.ny.gov

On Thursday, nonprofit legal advocacy group filed a federal civil rights complaint against the state of New Mexico, saying that their new online system for unemployment claimsdiscriminates against workers who don't speak English, the elderly, the disabled, and others without computer skills.

Jobless workers seeking unemployment benefits file online applications only in English under a computer system launched in January by the state Department of Workforce Solutions.

The application system discriminates against workers with a limited proficiency in English and creates a barrier to obtaining unemployment compensation in a state where more than a third of the population speaks Spanish at home, according to the complaint filed by the New Mexico Center on Law and Poverty with the U.S. Labor Department.

The state agency said workers can continue to use a toll-free telephone number and the call center provides assistance in Spanish.

"An individual may apply for and certify weekly for benefits online, but this option is not, nor has ever been mandatory or the only option to do so," the department said in a statement.

However, the complaint said the state has failed to inform people of that alternative and the agency's website is only in English.

The department "gives the impression that the online system is the exclusive channel for applying for unemployment benefits," the complaint said.

The federal government financed the state's $48 million computer system, which has drawn criticism from legislators and others for being so complex that it's difficult to use for New Mexicans seeking jobless benefits.

The complaint said the online system "creates a 'digital divide' that discriminates against New Mexican workers based on age, disability, race and national origin." The disabled, elderly and foreign-born Hispanics often have less access to the Internet and limited computer skills, according to the complaint.

The advocacy group said online unemployment applications and the department's website should be available in Spanish, and there should be an option to file a paper application in English, Spanish and other languages.