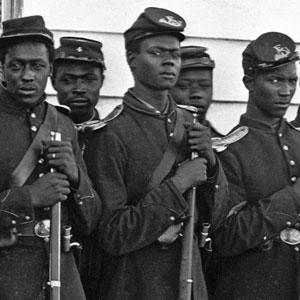 With July marking the 150th anniversary of the Battle of Gettysburg, it seems an appropriate time to examine the role of African-American soldiers during the Civil War.

If all you have seen is the movie "Glory," to illustrate the part black soldiers played during the Civil War, you're missing a big portion of the story. As soon as the Civil War began in April 1861, Frederick Douglass and others began urging President Abraham Lincoln to recruit African-Americans to help fight. Lincoln, however, had to be careful. He knew that many northern soldiers were fighting to preserve the Union and not end slavery. He worried that the North might lose support and the pipeline of volunteers would dry up. He also knew that recruiting black soldiers might force the Border States to secede, and then the task to win the war might be too great for the Union.

So, Lincoln took it slow, but by the fall of 1862 things had changed. The war was dragging on, and white volunteers lagging. So, when the Emancipation Proclamation was issued on January 1, 1863 it opened the door for the recruitment of African-American soldiers. The 54th Massachusetts Volunteers (the "Glory" regiment) was the first recruited. They did indeed take part in a suicide charge on Battery Wagner in which nearly their number were killed or wounded.

In general, however, the North was reluctant to use black soldiers in combat because the Confederacy swore they would execute or enslave black soldiers on the spot. In addition, many whites felt African-Americans did not have the "smarts" to be a combat soldier.

By the end of the war, almost 200,000 African-Americans had joined the Union Army, with some 40,000 dying. Abraham Lincoln acknowledged that without the services of black soldiers, the North might not have won the war.