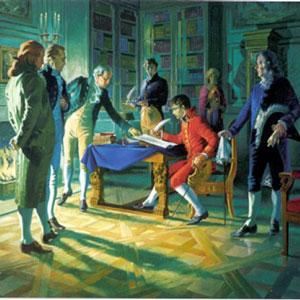 Although slavery was not a prevalent thought on the minds of President Thomas Jefferson and France’s ruler Napoleon Bonaparte as they signed the agreement allowing America to complete the Louisiana Purchase and remove the French from American soil. That transition became a solid factor in the future of slavery in America; it opened an entire new territory for cotton growers to expand their businesses and take their slaves with them. Photo Credit: livejournal.com

Recently we discussed one of American history’s ironies: If the American colonies had not won their independence, the slaves would have been better off.

Unfortunately, if the Louisiana Purchase, universally hailed as a great event for America, actually hurt African-Americans by perpetuating slavery.

Impossible, you say? Read on…

In 1802, Napoleon Bonaparte, ruler of France, sent an army to reclaim what is now Haiti. It seems that the revolutionary fever that swept through America and France also infected what was then a French colony called Hispaniola. At the time, a slave revolt expelled the French and made it the second republic in the western hemisphere, and the first run by blacks.

However, because of a combination of yellow fever and the American rebel army, we destroyed the French Army, which caused Napoleon to think about the looming war against England, and other European intrigues going on. He decided to forego North America, and offered to sell Louisiana to American President Thomas Jefferson.

At the time, slavery was a knotty problem the Founding Fathers conveniently sidestepped during the Constitutional Convention, and many people in America figured slavery would wither and die, and the problem would just go away. Eventually, the argument went, there will be less and less land for cotton growing (cotton is notoriously hard on the soil,) meaning a lesser need for slaves until slavery, too, died out.

But the Louisiana Purchase more than doubled the size of the U.S. overnight, and cotton growers packed up and moved to the new territory, taking their slaves with them into what became a big business, and slavery became an entrenched part of that process. It was not going to go away it just got bigger and bigger.

If France had held onto the Louisiana Purchase lands for just 20 more years, would slavery have died out of its own accord? It is a fascinating thought to consider.