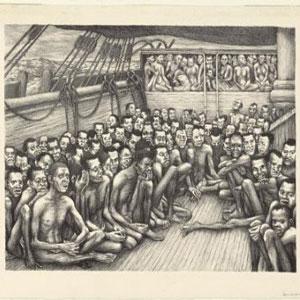 African men, women, and children, kidnapped and crowded aboard a slave ship for transport to America where they are sold into a life of fear, brutality, and cruelty that lasted for centuries. Photo Credit: academic.reed.edu

In 1789, there appeared a remarkable book entitled The Interesting Narrative of the Life of Olaudah Equiano or Gustavus Vassa, the African. The book details the harrowing and heart-breaking account of how a young African boy, kidnapped from his home, and forced into slavery became one of several racial discrimination cases of the era. Fortunately, the story has a happy-ending. Equiano purchased his freedom and went on to live a full life, which included a polar voyage. As an indictment of the cruelness and barbarism of slavery, this book has no equal.

In the second chapter, he explains how they took him from his village as a young boy of 11, along with his sister. “One day, when all our people were gone out to their works as usual, and only I and my dear sister were left to mind the house, two men and a woman got over our walls and in a moment seized us both, and, without giving us time to cry out, or make resistance, they stopped our mouths, and ran off with us into the nearest wood. Here they tied our hands, and continued to carry us as far as they could…”

As bad as that was, with miserable conditions aboard the crowded slave ship, Equiano was lucky because he did not die or get too sickly, they often just threw sickly slaves overboard. “I was soon put down under the decks….The closeness of the place, and the heat of the climate…being so crowded that each had scarcely room to turn himself…This produced copious perspirations, so that the air soon became unfit for respiration, from a variety of loathsome smells…The filth of necessary tubs, into which the children often fell and almost suffocated. The shrieks of the women, and the groans of the dying, rendered it a scene of horror almost inconceivable.”

Images like that fill the book – images that make one wonder how or why a person could treat another human being that way.