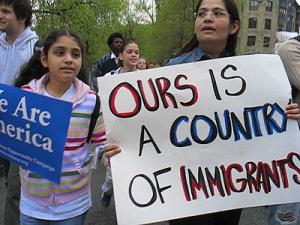 Immigration reform legislation requires tough enforcement for those who are in America in defiance of the law. Photo Credit: motherjones.com

The latest salvo across the bow of immigration reform came recently when Republican Senator Marco Rubio (Florida) – one of those working on immigration reform legislation – warned that any bipartisan deal on reform needs tough enforcement and even tougher penalties for those who are in America in defiance of the law.

"We're not awarding anybody anything. All we're doing is giving people the opportunity to eventually earn access to our new, improved and modernized legal immigration system," said Rubio, a Cuban-American.

Immigration reform is certainly an issue that could go a long way to easing racism in the United States by taking the vile label “illegals” out of the American consciousness. Yet although some type of immigration reform legislation is imminent, the need of many politicians to appear “not to be giving anything away” overshadows the reform effort.

The legislation in question includes a long, difficult citizenship process for the 11 million people it covers. In fact, Rubio said that perhaps it would be easier if people returned to their home countries and started the process from the beginning rather than use the system in the new legislation. 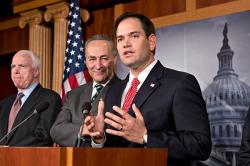 "So I would argue that the existing law is actually more lenient, that going back and waiting 10 years is going to be cheaper and faster than going through this process that we are outlining," he said.

Republicans have been trying to appear more amenable to immigration reform since President Barack Obama received about 70 percent of the Hispanic vote during the 2012 presidential election. However Rubio – a possible presidential candidate in 2016 – and other Republicans have to still appear hard-line on issues like border security that hold great importance for conservatives who dominate Republican presidential primaries.

The current reform legislation would toughen border requirements, require all employers to check the status of workers, and allow tens of thousands into the county with new visa programs while starting millions on a 13-year path to citizenship.