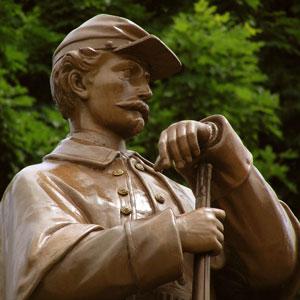 This monument, a gift to the town from former Gov. Frederick Smyth in 1893, bears the names of 22 Candia residents who died in the Civil War. The Civil War soldier statue on the top of the monument was made by the J.L. Mott Iron Works in New York City, at a cost of $865. Photo Credit: The collection of the NH Division of Historical Resources.

DURHAM, N.H. (AP) - A University of New Hampshire student research project on the Civil War finds that despite the state being one of the most liberal in the nation at the time, racism was common in the letters of its soldiers, including those who said they supported freeing the slaves.

Marzoli found that the soldiers' attitudes toward slavery were tied to their upbringing and education level. He said the more educated officers and soldiers appeared to be more abolitionist, while the common soldiers could often be very racist, even though none of them owned slaves.

"Racism was abundant in almost all of the soldiers' letters and diaries, however," Marzoli said. "Even the staunch abolitionists saw black people as almost inhuman and comical. However, they were not usually as derogatory as those who were against freeing the slaves."

Marzoli relied on primary sources such as the actual letters written by New Hampshire Civil War soldiers. Among the most memorable examples, he found, were the letters of 40-year-old John Henry Jenks from Keene. He served in the 14th New Hampshire Infantry Regiment.

"Although Jenks appeared to be an abolitionist, he never made mention of the topic in a political sense. Instead, he seemed to deeply care for the slaves' plight and saw them almost as equals," Marzoli said.

"Jenks thought that blacks were no different than whites, and because of this he seemed to be incredibly ahead of his time. He was definitely an anomaly, but unfortunately he was killed at the Battle of Cedar Creek in 1864," Marzoli said.

Marzoli is presenting his project at UNH's Undergraduate Research Conference on Thursday, April 25.