Whitney Young was an unsung leader of Civil Rights, working on anti-poverty programs such as the Job Corps, housing counseling and Head Start. Photo Credit: minnesotapublicradio.org

Whitney Young, Jr. was an unsung leader in the Civil Rights movement. He chose to work with leaders within the systems, including presidents in the Oval Office and CEOs in corporate boardrooms. Young felt that was critical to the Civil Rights movements to make meaningful gains where it mattered: to secure jobs, and implement anti-poverty programs like Head Start.

Young was often criticized for his approach of working within the system instead of just protesting against it.

Just before the March on Washington in 1963, President John F. Kennedy summoned six top civil rights leaders, Whitney Young, Jr. among them, to the White House to talk about his fears that civil rights legislation he was moving through Congress might be undermined if the march turned violent.

One of those leaders, John Lewis, later a longtime congressman from Georgia, tells the story of Young's boldness in "The Powerbroker: Whitney Young's Fight for Civil Rights," a documentary airing during Black History Month on the Public Broadcasting Service's series "Independent Lens" and shown in some community theaters.

In the civil rights struggle, Young was overshadowed by his larger-than-life peer, Martin Luther King Jr. But Young's penetration of white-dominated corporate boardrooms and the Oval Office over three administrations was critical to the movement. Working with leaders within the system, including three presidents, made him a target of criticism by those who wanted a more aggressive path to racial equality.

An appreciation for what Young brought to the movement came after his death in Nigeria in 1971 at age 49. But it was not sustained, said Dennis Dickerson, author of "Militant Mediator: Whitney M. Young Jr." "He should not be diminished," said Dickerson, a Vanderbilt University history professor who also appears in the film.

A number of schools and facilities have been named for Young. First lady Michelle Obama graduated from a Chicago high school named for him. But his role in economic issues surrounding civil rights has not gotten just due, said Marc Morial, president and CEO of the National Urban League, an organization Young led as executive director from 1961 to 1971. During his tenure the organization greatly expanded.

Young influenced a number of anti-poverty programs such as the Job Corps, housing counseling and Head Start, Morial said.

"He was one of the earliest voices who said to corporate America ... that business leaders and the business community had a stake in the development and rebuilding of urban America, but also in the success of civil rights," Morial said. 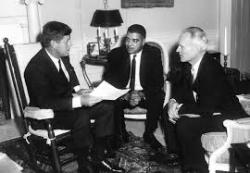 There, Young's father surreptitiously educated black students to become doctors, lawyers and teachers to escape segregation and poverty while tricking white financial backers of the school into believing he was training the black students to be nannies, maids, janitors and mechanics.

The school campus had been something of a shelter for Young from the everyday cruelty of segregation, but he encountered it head-on when he served in a black Army battalion led by white officers in World War II.

After that experience, Young dedicated himself to race relations. Later he borrowed on the postwar rebuilding of Western Europe to push with President Lyndon B. Johnson his proposal for a domestic Marshall Plan providing $145 billion to improve education, employment and welfare for black communities. Johnson folded some of his ideas into his Great Society anti-poverty programs.

Young overcame the broken relationship between blacks and President Richard M. Nixon to persuade him to heavily support social programs that assisted the poor. Nixon lauded Young's work when he spoke at his funeral.

Young's desire "was to help America live up to her ideals," Boswell said, quoting her uncle.

"He would say, 'I could become more popular if I got off the train in Harlem and shouted bad things about white people, but can I be more effective if I go downtown and help get jobs from white people to give to minorities,'" Boswell said in an interview in Washington with The Associated Press.

Young was able to tell people like industrialist Henry Ford II that they needed to step up and do something about the living and working conditions of blacks in ways that captured their respect, said Nancy Weiss Malkiel, author of the 1989 book "Whitney M. Young Jr. and the Struggle for Civil Rights."

Young was not as visible on the front lines of civil rights protests, but he could say with humor and partly in earnest to members of the white establishment that if they didn't deal with him, they would have to deal with Malcolm X and Stokely Carmichael, who espoused more radical agendas than King, Malkiel said.

Boswell's film airs as the first black president, Barack Obama, begins his second term in office. Obama, whose mother was white and father was black, has endured a racist backlash in his presidency and criticism from within the black community over whether he is doing enough for black Americans.

Dickerson said Young's ideas are a template that Obama has deployed in his political rise. "That is inter-racialism and an emphasis on corporate relations," he said. "That was Whitney Young's mantra and that's the president's mantra."