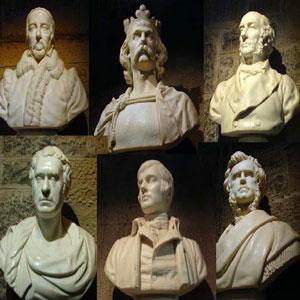 What do a missionary doctor, inventor of the steam engine, and a prime minister all have in common?

They make up three of the 16 marble-sculpted busts in the Hall of Heroes, located in the National Wallace Monument on top of Abbey Craig in Scotland. The presence of these 16 Scots reflect the views of the individuals and organizations of the 19th century who felt the 16 men’s contributions to science, industry, education, and the arts were noteworthy.

However, Wallace is not the only Scot commemorated in the monument. On the upper level of the 220-foot sandstone tower is the Hall of Heroes. Alan Scott, editor of rampantscotland.com, a website dedicated to providing information on Scottish culture, products, and services, comments on how these men could be perceived as heroes.

“It has to be seen in the historical context of the Victorians who were involved in the creation of the Wallace Monument near Stirling,” the Glasgow area resident says. “Since ‘hero’ does often involve some degree of publicity and knowledge of the person described as a hero, the selection does seem surprising to us in the late 20th, early 21st century.

At least there are no media personalities or pop stars in the list! And, apart from Robert the Bruce, none of their selections risked their lives for the benefit of a cause. Indeed, some were hardheaded, successful businessmen, but [all] were famous and well known in the early 19th century. I can picture a committee of bewhiskered gentlemen (no women involved in those days) arguing in the 1830s round a table about who should be included or excluded!”

According to Scott’s website, which he started 15 years ago; prominent Scots formed a National Monument Committee in the 1830s and took serious steps to build the monument in the 1850s. Two noteworthy individuals in the Hall of Heroes include a scientist and missionary doctor. James Watt (1736 – 1819) invented the steam engine, which substantially contributed to the Industrial Revolution. He also created several other inventions, and his name is the origin of the watt unit of power.

Interestingly, Watt did not attend school regularly because he was frequently ill. In Scott’s research, he found that Watt spent time in his father’s workshop where he learned to make models, and honed his engineering skills. Watt actually trained as an instrument maker, and went on to obtain a post at the University of Glasgow, which according to its website, is the fourth oldest university in the English-speaking world.

Another famous Scot is Dr. David Livingstone (1813 – 1873), a missionary doctor who discovered uncharted areas of Africa. Like Watt, Livingstone was a student at Glasgow University, where he took up medicine and theology.Livingstone became one of the first Europeans to explore large parts of Africa, and even named Victoria Falls after Queen Victoria when he heard the natives call the falls “the smoke that thunders.”

H.M. Stanley’s quote regarding Livingstone occurred after Livingstone had been in the bush several years on an expedition that began in 1865. Stanley, a Welsh journalist and explorer, set out to find him in 1872. When Stanley greeted him, he used the now popular quote, “Dr. Livingstone, I presume?”

Other notable men in the Hall of Heroes include Robert the Bruce, king of Scotland from 1306 – 1329, who freed Scotland from English rule, thus ending the Wars of Independence; William Ewart Gladstone, four-time prime minister of Great Britain; and Sir Walter Scott, who is considered the inventor and greatest practitioner of the historical novel.