Leni Riefenstahl: Her Rise To Fame During Nazi Germany 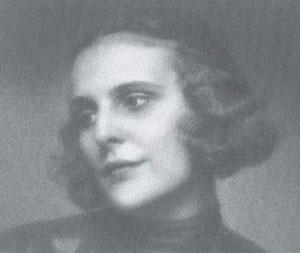 German director and photographer, Leni Riefenstahl, was born at the turn of the century, at a historical moment when women were just starting to gain a foothold in a male-dominated world, particularly in the arts. It was also a time when the voices of women like Frida Kahlo, and Mary Austin, women with definite political and philosophical vantage points, were beginning to be heard.

Despite working in a film industry where a patriarchal political climate claimed ownership, Riefenstahl ascended the ladder from actress to director, pioneering new approaches in everything from camera angle to film editing. As history would have it, Adolph Hitler’s interest in her substantially bolstered her transition to director, an association that allowed her to make groundbreaking documentaries, including most of which were intimately wrapped up in the Nazi propaganda machine.

Her success, either driven at the cost of political and philosophical morals, or because she simply made the best of what she had at the time in order to pursue her art has been the subject of much debate. However, her status as a female pioneer in the art world in terms of innovation and scope is undeniable, and her story is one that gives us all insight into our own ambitions, and how they happen to intersect with our own moments in time. Born in Berlin in 1902, Riefenstahl began her artistic career as a dancer, who became enamored early on with the music and graceful movements of the ballet.

She initially studied with the Russian ballet and then went on to study modern and futuristic dance under Mary Wigman. Her career quickly skyrocketed, and she performed all across the European stage. Unfortunately, after multiple foot injuries and eventually a knee injury, her career came to a halt in 1924.

Other interests quickly consumed her, and she became intrigued with the growing art and technology of the film industry. She quickly rose as a world-renowned actress, starring in many prominent films in the mid to late 1920s and early 1930s. During the filming sessions, she determined to learn everything about the techniques of camera work, directing, and editing.

Her acting career transitioned seamlessly into directing when she developed, directed, and starred in Das blaue Licht (The Blue Light) in 1932, which garnered a lot of attention overseas, and received the silver medal at the 1932 Biennale in Venice, Italy. In addition, this film is what attracted the interest of Adolf Hitler.

She produced two of her best-acclaimed films for Hitler, including Triumph des Willens (Triumph of the Wills), which premiered in 1935. This documentary detailed the Reich Party Congress in 1934 in Nuremberg. 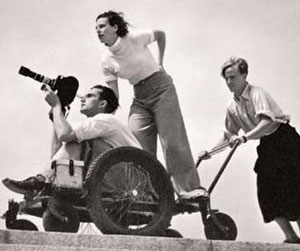 Triumph was the recipient of multiple awards, including the gold medal in Paris in 1935, and the gold medal at the World Exhibition in 1937. Riefenstahl also directed another world famous film about the Olympic Games, set in two parts. Titled Fest der Völker (Festival of Nations) and Fest der Schönheit (Festival of Beauty), the films received numerous awards, including the gold medal in Paris in 1937, the World’s Best Film award in Venice in 1938, and the Olympic Award by the IOC in 1939, and was classified as one of the world’s best ten films in 1956. During World War II, she made the film Tiefland, which did not come out until well after the war in 1954, near the end of her film career.

When the Allied Forces occupied Germany in 1945, Riefenstahl’s ties to Nazi Germany came back to haunt her, and they placed her on house arrest soon thereafter. Over the next four years, they detained, interrogated, and de-Nazified her until her trial in 1949. Although not convicted as a war criminal, they condemned Riefenstahl’s films as National Socialist propaganda films, which resulted in essentially destroying her film career.

In her autobiography, Leni Riefenstahl: A Memoir, and the 1993 documentary film, The Wonderful, Horrible Life of Leni Riefenstahl, she elaborated on her life and artistic work, which provides historians with insight into her stance on Nazi Germany. According to her New York Times obituary, “Ms. Riefenstahl never denied her early conviction that Hitler could ‘save’ Germany.

She also said that her idealized image of him fell apart ‘far too late,’ near the end of World War II. But amid widespread skepticism, she insisted that she was never a Nazi and that ‘Triumph of the Will’ and ‘Olympia’ were apolitical, inspired only by her desire to create works of art,” according to an article in the New York Times.

Some hold to the theory that she was a product of her times and subscribed to the ideals and promises of the Nazi paradigm. However, it is also quite possible that she exploited the interest of a powerful leader in order to advance her career as a woman in an industry dominated by men.

Although Riefenstahl’s documentaries were well acclaimed and even studied at film schools for her novel approach to camera angle and composition, her reputation as a Nazi propagandist continued to haunt her. By the 1960s, she finally found a new outlet for her creative instincts in the world of photography. Perhaps her most well known subjects were the Nuba people of Sudan. She made several trips to Africa to photograph these people and cultivated many lasting relationships.

From this came two well honored books, The Last of the Nuba (1974), and The People of Kau (1976), as well as several publications in The Sunday Times Magazine, Paris Match, L’Europeo, and Newsweek. She exhibited these and many of her other photographs around the world, everywhere from Tokyo to Milan. Riefenstahl’s career did not wane, as she grew older. At the age of 71, Riefenstahl attended a diving course and turned her photographic focus to underwater vistas.

She published two award winning books in this venue in her later years — The Coral Gardens, and The Wonders Under Water — both of which have a world circulation. At the age of 97, she traveled back to the Sudan in the middle of the Sudanese civil wars to try to discover the fate of her Nuba friends with whom she had lost contact, although she never got the answers she was looking for; it was on this trip, despite her advanced age, she survived a helicopter crash.

Riefenstahl continued to pursue her art and live life to the fullest right up until the very end. She died in Germany on September 8, 2003, only a few weeks after celebrating her 101st birthday.