Race Protections in the 13th, 14th, and 15th Amendments

The Civil Rights Movement was yet another attempt to realize the rights for African Americans as outlined in our Constitution. Photo Credit: mrctv.org[/caption]The preamble to our constitution reads, "We hold these truths to be self-evident, that all men are created equal, that they are endowed by their Creator with certain unalienable Rights, that among these are Life, Liberty and the pursuit of Happiness."

Unfortunately, for a long time, the laws of the United States Government did not reflect that everyone would have access to those unalienable rights. Slavery had numerous legal protections that would have been difficult to repeal. This was why at the end of the Civil War, several constitutional amendments were put in place to abolish all slavery in the country, and to protect people of various races and heritages.

The 13th amendment: Abolition of Slavery

SECTION 1. Neither slavery nor involuntary servitude, except as a punishment for crime whereof the party shall have been duly convicted, shall exist within the United States, or any place subject to their jurisdiction.

SECTION. 2. Congress shall have power to enforce this article by appropriate legislation.

But what does this mean? Let's break it down.

Section 1 states that nobody can be forced to work against their will without pay, unless they have been convicted of a crime. These protections are offered to everyone dwelling both within the United States and within certain other areas of U.S. sovereignty, such as Puerto Rico.

Section 2 states that Congress will be responsible for enforcing Section 1 by making laws that protect people from slavery and punish people who keep slaves.

Even though the Emancipation Proclamation stated that slaves were freed, it was the 13th Amendment that abolished it forever.

The 14th amendment: Citizenship, Due Process, and Equal Protection 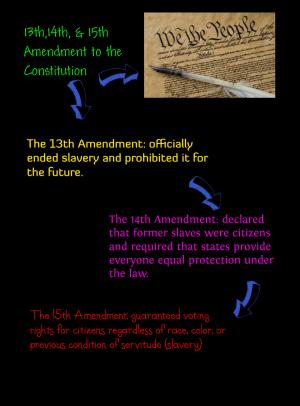 These three amendments are central to the African-American experience in American history. Photo Credit: gloster.com[/caption]Unfortunately, after the 13th amendment was passed, many states continued to approve and implement laws that restricted the rights of former slaves. So, on June 13, 1866, Congress passed the 14th Amendment.

The 14th Amendment did a lot of different things. First, it granted citizenship to all former slaves, changing the rule in Article 1, Section 2 that slaves only be counted as three-fifths of a person. However, it’s important to remember that citizenship was not extended to the Native Americans under the 14th Amendment until the Indian Citizenship Act was passed in 1942. This was because Native Americans were governed by tribal law, and were not “subject to U.S. jurisdiction.”

Second, the 14th Amendment placed limitations on the individual states, explicitly prohibiting them from depriving individuals of life, liberty, or property without due process. It also mandated that states guarantee everyone equal protection under the law.

Third, the 14th Amendment prohibited Confederate leaders from holding elected office or civil positions. It also refused to take on any Confederate debts, and declared that any debts due to the emancipation of slaves were “illegal and void,” or not allowed.

SECTION. 2. Representatives shall be apportioned among the several States according to their respective numbers, counting the whole number of persons in each State, excluding Indians not taxed. But when the right to vote at any election for the choice of electors for President and Vice-President of the United States, Representatives in Congress, the Executive and Judicial officers of a State, or the members of the Legislature thereof, is denied to any of the male inhabitants of such State, being twenty-one years of age, and citizens of the United States, or in any way abridged, except for participation in rebellion, or other crime, the basis of representation therein shall be reduced in the proportion which the number of such male citizens shall bear to the whole number of male citizens twenty-one years of age in such State.

SECTION. 3. No person shall be a Senator or Representative in Congress, or elector of President and Vice-President, or hold any office, civil or military, under the United States, or under any State, who, having previously taken an oath, as a member of Congress, or as an officer of the United States, or as a member of any State legislature, or as an executive or judicial officer of any State, to support the Constitution of the United States, shall have engaged in insurrection or rebellion against the same, or given aid or comfort to the enemies thereof. But Congress may by a vote of two-thirds of each House, remove such disability.

SECTION. 5. The Congress shall have the power to enforce, by appropriate legislation, the provisions of this article.

Just like in the 13th Amendment, Section 5 states that Congress will be responsible for enforcing Sections 1, 2, 3, and 4 by making laws that protect people from slavery and punish people who keep slaves.

The 15th Amendment: Everyone Can Vote, No Matter Their Race

The 15th Amendment was the last of the “Reconstruction Era” amendments that were ratified in the period following the Civil War. Passed in February of 1869 and ratified a year later, the 15th Amendment was designed to put an end to laws prohibiting former slaves and other people of color from voting.

SECTION. 2. The Congress shall have the power to enforce this article by appropriate legislation.

For a number of years, states refused to ratify the amendment because they did not want people of various ethnicities or other heritages voting. For example, California and Oregon did not want Chinese immigrants voting, and many other states were wary of allowing Irish immigrants the ability to vote.

Some states kept people from voting in a number of creative ways. Poll taxes, literacy tests, and grandfather clauses were all used to prohibit people people from exercising their 15th Amendment rights to vote.

Additionally, as the 15th Amendment did not mention gender, women were not allowed to vote until the 19th Amendment was ratified in 1920. Voting equality was finally achieved for everyone after the Civil Rights Act of 1964 and the Voting Rights Act of 1965 were passed and reinforced by the Supreme Court.