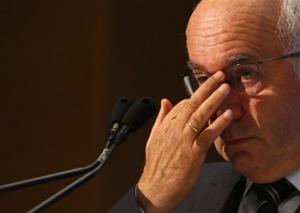 The Italian Soccer Federation is plagued by racism as a result of the football federation's new president being investigated by UEFA over an alleged racist comment and could be banned for three months.

Carlo Tavecchio, a long-standing executive in Italian soccer, was elected last week despite causing a stir over a reference to bananas when discussing the presence of foreign players in Italy.

Players' and coaches' associations in Italy both expressed outrage, and FIFA had urged the Italian federation to investigate. However, UEFA has intervened and opened a case that could result in Tavecchio being suspended for one to three months and fined if found guilty.

The 71-year-old Tavecchio has been "personally informed by UEFA about the decision of its chief ethics and disciplinary inspector to open a disciplinary investigation on alleged racist comments made by him," UEFA said. 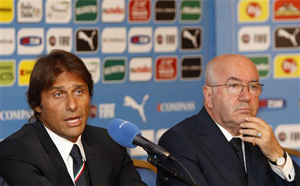 Using a hypothetical name, Tavecchio had said, "In England they select players based on professionalism, whereas we say that 'Opti Poba' is here, he was eating bananas before and now he's starting for Lazio and that's OK."

The investigator's report is due to be submitted on Friday, and UEFA's control, ethics and disciplinary body will then decide how to proceed with the case.

Tavecchio, who also has a UEFA role as a member of its youth and amateur football committee, has already apologized for his comment and insisted he is not racist.

"I am calm and respectful of UEFA's decision," Tavecchio said in a statement on the federation's website. "It's a required procedure, so we already knew it was coming and I am certain that I can explain also in the UEFA headquarters both my mistake and my real intentions."

UEFA is due to stage an anti-discrimination conference next month in Rome, where Tavecchio would have been expected to speak as the host federation's top official.