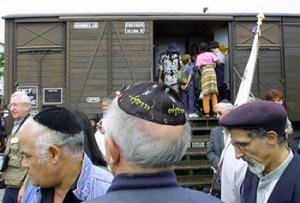 This Aug. 20, 2001, file photo shows French Holocaust survivors gathering at the site of the former Drancy detention camp, north of Paris, France. From Aug. 20, 1941 until the end of World War II, more than 70,000 Jewish men, women and children passed through Drancy on their way to Nazi extermination camps, particularly Auschwitz. The wagon is part of the memorial site. Photo Credit: The Associated Press, Michel Euler, File.

France will be compensating thousands of Holocaust survivors and family members in the United States and elsewhere. They will be entitled to compensation from a $60 million French-U.S. fund - reparations to those deported by France's state rail company SNCF during the Nazi occupation.

As part of the deal, the U.S. government will work to end lawsuits and other compensation claims in U.S. courts against SNCF, which is bidding for lucrative high-speed rail and other contracts in U.S. markets. State legislators in Maryland, New York, Florida and California have tried to punish SNCF for its Holocaust-era actions.

"This is another measure of justice for the harms of one of history's darkest eras," said the U.S. Special Adviser on Holocaust Issues, Stuart Eizenstat, who spent three years working with French officials on the agreement.

SNCF transported about 76,000 French Jews to Nazi concentration camps, though experts disagree on its degree of guilt. SNCF has expressed regret for what happened, but argues it had no effective control over operations during the Nazi occupation from 1940 to 1944.

The French Foreign Ministry and U.S. State Department announced an accord Friday on the compensation fund, which will be financed by the French government and managed by the United States. The agreement will be signed Monday in Washington, but it still must get approval from the French Parliament, which could take months.

The French government has already paid more than $6 billion in reparations - but only to French citizens and certain deportees. The new deal will allow compensation for Americans, Israelis and some others who were not eligible for other French reparations programs.

The money should break down to about $100,000 each for survivors, and tens of thousands of dollars for spouses, Eizenstat said.

Although SNCF is not a party to the agreement, the company will contribute $4 million over the next five years to fund Holocaust memorials and museums in the U.S., Israel and France, according to Eizenstat.

The French government has pledged to encourage French lawmakers to approve the deal, Eizenstat said.

"The objective today was to be able to provide reparations - even 70 years later - that they could claim, given the trauma, the barbarity and the horror that the deportation represented for them," said Patrizianna Sparacino-Thiellay, a French ambassador for human rights who was a key architect of the deal.

The French government is holding several events marking 70 years since the Allies liberated France from Nazi control in 1944.

U.S. Rep. Carolyn B. Maloney of New York, who had pushed the U.S. government to pressure France to agree to compensation, hailed the deal as a "breakthrough in a decades-long struggle for justice."

The Anti-Defamation League, a Jewish civil rights organization, also welcomed the accord.

"There is no amount of money that could ever make up for the horrific injustice done to these victims and their families," said Abraham Foxman, ADL's national director and a Holocaust survivor. "But agreements like this provide some modest redress, an important recognition of their pain, and acknowledge the responsibility of governments and institutions to leave no stone unturned in seeking every possible measure of justice for Holocaust victims."

The deal comes as France, home to western Europe's largest Jewish community, is battling new concerns about anti-Semitism. French authorities and Jewish leaders denounced a rape and robbery attack with anti-Semitic overtones this week against a French couple.

The number of anti-Semitic incidents in France has grown 91 percent this year compared to last year, according to CRIF, France's leading Jewish organization. Jewish groups in France are also concerned about rising Islamic extremism and the resurgent far right.

Lee reported from Washington. Angela Charlton in Paris contributed to this report.