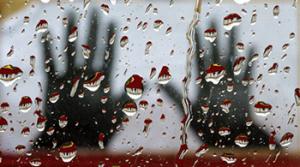 Artwork on a boarded up business reflects in raindrops on a window Sunday, Nov. 23, 2014, more than three months after a black 18-year-old was shot and killed nearby by a white policeman in Ferguson, Mo. Many Ferguson businesses have boarded up their windows in anticipation of the announcement by a grand jury whether to criminally charge officer, Darren Wilson in the killing of Michael Brown. Photo Credit: The Associated Press, Charlie Riedel.

The Ferguson grand jury decision will be critical, not only for the people of Ferguson, but for many Americans. A grand jury has reached a decision about whether to indict a white police officer in the shooting death of Michael Brown, an unarmed black 18-year-old, a spokesman for St. Louis County's top prosecutor said Monday.

The panel has been considering charges against Darren Wilson, the suburban St. Louis officer who fatally shot Brown after a confrontation in August. In a brief email to reporters, spokesman Ed Magee said the decision would be announced later Monday. He offered no immediate details

The Aug. 9 shooting inflamed tensions in the predominantly black St. Louis suburb that is patrolled by an overwhelmingly white police force. As Brown's body lay for hours in the center of a residential street, an angry crowd of onlookers gathered. Rioting and looting occurred the following night, and police responded with armored vehicles and tear gas.

Brown's killing reignited a debate over how police treat young black men in the U.S. It drew attention to racial tensions simmering in Ferguson and other U.S. communities four decades after the civil rights movement of the 1960s. The tensions have evoked other racially charged cases, including the riots that rocked Los Angeles in 1992 after the acquittal of white police officers in the videotaped beating of black motorist Rodney King. More recently, peaceful protests followed the 2013 not-guilty verdict in the Florida slaying in unarmed black teenager Trayvon Martin by George Zimmerman, who was not a police officer but coordinated the local neighborhood watch.

Missouri Gov. Jay Nixon was traveling to St. Louis from the Capitol on Monday afternoon, spokesman Scott Holste told the AP, but did not say why. 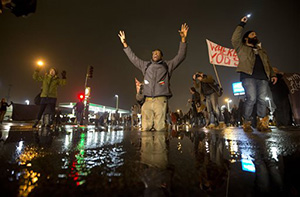 Speculation about the timing of an announcement swirled and largely peaceful protests took place during the weekend after the grand jury met Friday but apparently did not reach a decision.

Many had thought a grand jury decision would be announced Sunday, based partly on a stepped-up police presence in the preceding days.

St. Louis County Prosecutor Bob McCulloch's office had said he expected a decision by mid-to-late November, but it was not ultimately not in his control. The 12-person grand jury deliberates in secret and sets its own schedule depending upon when the members are available.

Benjamin Crump, an attorney for Brown's family, said Sunday that they were frustrated the prosecutor did not charge Wilson himself or suggest a charge to grand jurors.

As it is, "you don't have any direction, you're just putting all the evidence out there and you're going to let them figure it out and they can make up their own minds," Crump said. "You know, it just boggles the mind why he thinks this is fair."

It's not uncommon for deliberations to take a while in complex cases when self-defense is alleged or when there are two widely conflicting versions, according to Cole County Prosecutor Mark Richardson, who is not involved in the Ferguson case.

Sunday would have been an opportune time to minimize disruptions from protests, since schools and governments are planning on only a partial holiday workweek, Washington University law professor Peter Joy said, but that Monday or Tuesday still would make sense.

During Sunday's church services, some pastors encouraged their flocks not to fret. The Rev. Freddy Clark of Shalom Church in Florissant told the mostly black interdenominational congregation that "justice will be served" no matter the decision goes, because God will take care of it.

Now that the decision has been made, what Brown did before the incident would be relevant in a trial and would have played a major role, since it would have gone into the defense explaining Brown's state of mind at the time. It's clear that the prosecutor, on his own, thought there was not enough evidence for a trial, which is why he had the data dump on the grand jury.