Danbury, Connecticut Police Department is making a concerted effort to recruit minorities. Come January 2015, the department will know how successful its efforts have been. Photo Credit: latino.foxnews.com

While it's too early to say how many Latino and black applicants will survive testing and interviewing to emerge as the top-ranked candidates when the city begins hiring in January, there is a good chance that some of the best recruits will be minorities.

"It is very encouraging, and it means we are doing our job," said Denise Janey, the city's chief examiner for civil service. "We have a recruitment team that targets anyone who has a passion to be a police officer, but we did reach out specifically to spread the message to minorities to diversify our department."

The effort to attract qualified Latino candidates in particular comes at a time when Danbury's Hispanic population is at 25 percent and growing.

The 153-member Danbury Police Department has 14 Hispanic officers, representing 9 percent of the force, according to the city's human resources department.

As many as 12 openings are expected in the police department in the 18 months after Jan. 1, Mayor Mark Boughton said. Another 40 percent of officers will become eligible for retirement over the next year.

Making sure minorities have a fair shot at the open jobs is a top priority, the mayor said.

"We strive to have a department that reflects the residents that we serve," Boughton said.

"It would help to have more cops who speak Spanish and Portuguese so people feel like they aren't being targeted," says Emanuela Leaf, a Brazilian and the editor of Tribuna newspaper. "We need a much better relationship (between) the police department and the minority population, because we have seen what happens when things go unchecked for so long in Ferguson." 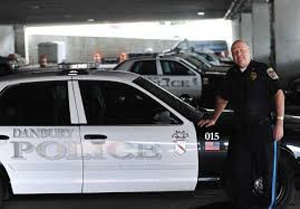 Ferguson is the predominately black St. Louis suburb where an officer on a predominantly white police force shot an unarmed black teenager, leading to racial unrest.

Danbury developed its own ethnic tensions in 2006, when 11 undocumented day laborers were picked up by uncover police and turned over to immigration agents. The day laborers sued, and Danbury was required to pay a $400,000 settlement. Protests for and against the laborers made national headlines.

At the time, the Danbury police force was 7 percent Hispanic and 89 percent white, according to records obtained by the Associated Press.

To attract more minority candidates, the city's recruitment team reaches out to churches and attends community events to encourage minorities to apply. The city's police chief said such outreach is critical in developing the department's credibility.

Baker and the mayor said the city is bound by the restraints of state standards and the civil service process, which dictates how the best-qualified candidates are identified.

That process starts with a class for which candidates apply online to take the police test. Typically, half the class scores the minimum 70 percent needed to advance to a round of oral exams, where candidates explain how they would respond to a series of hypothetical situations.

The results of these oral and written tests are then used in ranking applicants.

The highest-ranking candidates get an offer of employment -- with a starting salary of $52,970 -- subject to a background check, a polygraph test and a psychological exam.

As much as the city wants the top police candidates regardless of race, ethnicity or gender, the city also wants diversity.

"You would like to think it does not make a difference," Janey said, "but when someone looks like you and talks like you and understands things the way you do, it can make a big difference.

"I am hoping we are successful in hiring some of these minorities, but it is not up to me. It is up to their test results."