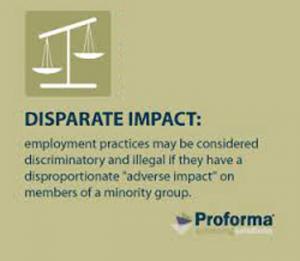 Minorities are often discriminated against, albeit unintentionally, in the areas of housing and employment. Photo Credit: proformascreening.com

Minorities are often discriminated against by prevalent and common business policies and practices, and sometimes it is unintentional. This unintentional discrimination is often referred to as disparate impact. The Supreme Court could decide this month to take up another housing discrimination case that challenges the legal doctrine known as disparate impact. Two previous housing bias cases were settled out of court in 2012 and 2013, just before the justices were set to hear oral arguments.

A look at how disparate impact works is illustrated below.

Disparate impact cases often use statistics to show that certain policies can harm racial minorities even when there is no intent to discriminate. Under the theory, even a policy that appears neutral on its face can have a disproportionate impact on minority groups. For example, a mortgage lender's use of credit scores to determine interest rates might seem neutral. But in practice, that policy could mean higher interest rates for black and Hispanic borrowers who tend to have lower credit scores than whites. 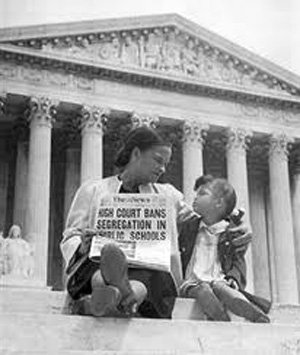 Disparate impact has been around for more than 40 years, since the Supreme Court first upheld the doctrine in 1971. It formally was enacted as part of employment discrimination laws in 1991, but opponents say it's not specifically allowed in housing policy under the language of the Fair Housing Act.

Banks, mortgage lenders and other opponents say it's not fair to prosecute them for housing bias if there is no motive to discriminate. They say nearly every business decision could be subject to a disparate impact lawsuit. That includes down payment requirements, debt-to-income ratio rules and other risk-based rules for buying a home.

Civil rights advocates argue that banks and landlords may not intend to discriminate, but it is crucial to look at the impact of their policies. They say courts must look at the actual effect, and not the intent, of the policies to determine whether they discriminate. Without disparate impact, civil rights groups say it would be much harder to combat discrimination that is not overt but still has the effect of hurting racial minorities.