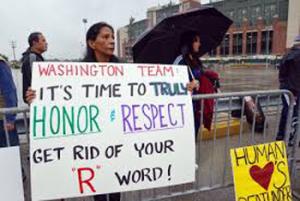 Many Native Americans have made, and continue to make, an appeal for the Washington professional football team to change its name and mascot. Photo Credit: bleacherreport.com

Should the Washington Redskins change their name? In this era of racial and ethnic awareness, and the efforts to be respectful and politically correct, is there any redeeming value to continuing to use a name that many Native Americans consider racist and insensitive?

The Redskins nickname and mascot have been up for criticism and debate for decades, but no time has the name "Redskins" received so much attention as it has in recent months.

As a league MVP kicker, member of a Super Bowl-winning team and general ambassador in his work with the franchise's alumni association, Mark Moseley has been associated with the Washington Redskins for some four decades. He's seen the debate over the team's nickname come and go since the 1970s, usually as a flash-in-the-pan topic that disappears after a day or so.

This time is different. The campaign to ditch "Redskins" by those who consider it a racial slur has reached unprecedented momentum over the last 18 months. "We all thought it would just go away," Moseley said. "Because it is such a ridiculous subject."

Moseley concedes that the debate shows no signs of abating, and he's recently become more active in supporting team owner Dan Snyder's quest to keep the name. Both sides are digging in, the words are getting nastier, and there's no real possibility of compromise: Either the name stays or it goes.

Theories abound as to why Snyder is on the defensive like never before.

"Politicians," said Joe Theismann, Washington's Super Bowl-winning quarterback in the 1982 season and another supporter of the name. "It's an election year." 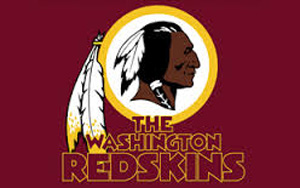 Possible Democratic presidential candidate Hillary Clinton has called it "insensitive." Fifty Democratic senators equated the name to "racism and bigotry." Maryland Gov. Martin O'Malley, who is mulling a run for president, said it is "probably time" for the name to change. President Barack Obama said he would "think about changing" the name if he owned the team.

But the politicians were late-comers. A confluence of events - and several missteps by Snyder and his organization - has made the issue a topic du jour.

It started with a February 2013 symposium on mascot history at the Smithsonian that left a 20-year-old Redskins fan so embarrassed that he took over his team gear and said: "I really don't feel right wearing this stuff now."

That was soon followed by the latest hearing in a long-running case brought by a group of Native Americans intent on stripping the team of its trademark protection - the U.S. Patent and Trademark Office eventually ruled against the Redskins, but the case will likely be tied up in the courts for years. Then, last spring, the opposition got an unexpected boost from Snyder himself. The owner has always vowed never to change the name, but he came across as especially strident when he told USA Today: "We'll never change the name. It's that simple. NEVER - you can use caps."

Soon, the Oneida Indian Nation in New York had joined the fray as a major player, buying television and radio ads in major markets - including one that ran during the NBA finals. Now, every time the team does anything to promote the name, Oneida counters with a news release within minutes. The anti-"Redskins" coalition never had an ally like it.

"They really put a lot of effort and personal time - and the important thing, money - into what we were doing," said Suzan Shown Harjo, a longtime lead figure in the trademark case. "We've never had money before. We've always done this on a wing and a prayer." 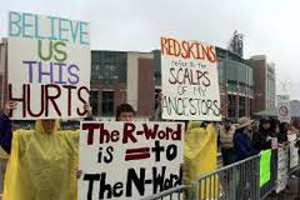 When Snyder started an Original Americans Foundation to give financial support to Native American tribes, Harjo called it "somewhere between a PR assault and bribery." When a major sector of the United Church of Christ was preparing a vote to boycott the Redskins, the team tried to make its case by having three self-identified members of the Blackfeet Nation call church leader Rev. John Deckenback on the phone, but Deckenback said the three didn't really push the team's cause and called the interaction a "somewhat weird experience."

A blogger hired by the Redskins to defend the team's name quit after two weeks. The team tried to make it a big deal when a self-proclaimed Native American in favor of the name arrived two weeks ago at training camp, giving him a VIP pass and making him available to the media, but the man was a D.C.-area native who couldn't spell the name of the tribe he said he was representing. When the team unveiled a "Redskins Facts" website aimed at boosting support for the name, The Washington Post examined the "facts" as presented and awarded the team a score of Three Pinocchios for leaving a "false impression."

On his Redskins-owned radio station, ESPN 980, Snyder last week derided the "fun, chit-chat, cocktail talk about the name" and said detractors should be focusing more on the plight of Native Americans. His opponents point out that Snyder paid no heed to Native issues during his first 14 years as an owner and made it a focus only after the name debate swelled late last year.

"Dan Snyder's comments are proof that he is living in a bigoted billionaire bubble," was the Oneida Nation's predictably swift response. "For him to claim that a racial slur is 'fun' is grotesque."

Opponents see the rising opposition as part of a constant drip, drip, drip of anti-Redskins sentiment they hope will prevail.

"We're in this until the name changes," Oneida representative Ray Halbritter said.

Such inevitability is not felt in the Snyder camp.

"I'm telling you," Moseley said, "somebody would have to drop a bomb on FedEx Field to get us to change."