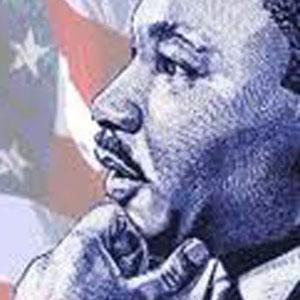 Dr. Martin Luther King, Jr., a man who fought for his beliefs and never wavered in his battle against racism, continues to inspire people of all colors, religions, ages, and cultures. His love for all Americans continues to live on in his memory. Photo Credit: communityjournal.com

One of the best ways to remember Martin Luther King, Jr. is to continue some aspect of the work for which he lived and died. But there is so much left to be done.

Forty-five years ago on April 4, 1968, an assassin’s bullet claimed the life of Martin Luther King, Jr. at the Lorraine Motel in Memphis, Tennessee. King was there in support of the garbage workers who were striking to get better wages.

Five years earlier in 1963, the March on Washington for Jobs and Freedom – one of the largest political rallies for human rights in the history of the United States – organized by a group of civil rights, labor, and religious organizations, King among them. An estimated 75 percent of the marchers were black, and the remaining 25 percent were white and other minorities. The march is credited for being the primary impetus and influence in the passage of the Civil Rights Act in 1964.

Many positive and much needed social, political, educational, and economic changes have occurred since the 1963 March on Washington, the subsequent passage of the Civil Rights Act in 1964 and the Voting Rights Act in 1965, and King’s death, but much more needs to be done.

Evidence abounds — too much for summarization in this space, but recent and well-respected research findings paint a compelling picture.

A study released in 2010, by the Institute on Assets and Social Policy at Brandeis University, poignantly and pointedly confirmed the growing wealth gap between white and African-American families. The study shows that during the 23-year period between 1984 and 2007, when America enjoyed an unprecedented economic boom, the poverty and wealth divide quadrupled among blacks and whites. Middle-income white households gained far more wealth than high-income African-American households.

The study lays the cause of the fourfold increase in the wealth gap directly at the feet of continuing discriminatory practices in the housing, labor, and credit markets. Thomas Shapiro, who authored The Hidden Costs of Being African American and co-authored Black Wealth/White Wealth, states, “A U-turn is needed. Public policies have and continue to play a major role in creating and sustaining the racial wealth gap, and they must play a role in closing it.” 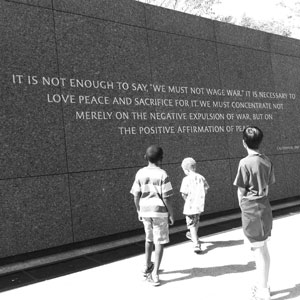 Unfortunately, this trend continues in the overall educational achievement gap. Upon graduation from high school, African-American and Latino students perform at the 8th grade level compared to that of Whites in both reading and math. A history of segregation, poor quality schools, broken families, and poor economic conditions are all contributing factors to these poor educational outcomes.

When it comes to the overall state of health of African-Americans, the data is consistently clear. The morbidity and mortality rates are higher for blacks than whites in most chronic (heart disease, cancers, diabetes, etc.) diseases. So are the death rates. This is not a surprise when one considers the inability to access quality healthcare or buy foods that promote health, as well as other activities that promote healthy outcomes.

More importantly, like Martin Luther King, Jr., it will require a real commitment to work to do something about it.