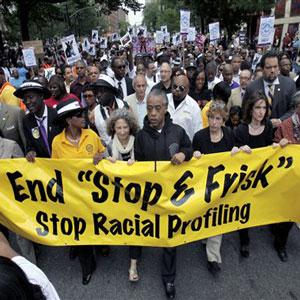 The NYPD stop and frisk program is seen by many as racist. In this June 17, 2012 file photo, Rev. Al Sharpton, center, walks with thousands along Fifth Avenue, during a silent march to end the "stop-and-frisk" program in New York. A federal trial began yesterday in New York where the NYPD’s practice of stopping, questioning, and frisking people on the street will face a sweeping legal challenge. Photo Credit: AP/Seth Wenig

NEW YORK (AP) - Many of the five million New Yorkers stopped, questioned, and sometimes frisked by police in the past decade were wrongly targeted because of their race, lawyers for four men who said they were illegally stopped said Monday. New York Police Department lawyers countered that officers must go where the crime is - and the crime is overwhelmingly in minority neighborhoods.

A civil trial that began Monday in federal court in Manhattan will examine the controversial tactic that has become a city flashpoint, with mass demonstrations, City Council hearings, and mayoral candidates calling for reform. The lawsuit, now a class action, seeks a court-appointed monitor to oversee changes to how the police make stops.

The courtroom and overflow rooms were packed Monday, and stop-and-frisk opponents held an afternoon rally outside the courthouse. The Rev. Jesse Jackson watched the opening statements Monday, telling reporters outside the court afterward: "I heard rationalization and justification rather than explanation from the city. They were not denying. They were justifying."

The trial is expected to last more than a month.

The mayor and police commissioner say stop-and-frisk is a life-saving, crime-stopping tool that has helped drive crime down to record lows.

But Darius Charney, the lawyer for the four men who filed the suit in 2008, said the department is doing stops illegally and must be reformed. He called many of the stops a "frightening and degrading experience" for "thousands if not millions" of New Yorkers.

Charney, of the Center for Constitutional Rights, called the stops "arbitrary, unnecessary, and unconstitutional," and promised plaintiffs will show the judge "powerful testimonial and statistical evidence" that New Yorkers are routinely stopped without suspicion.

Two witnesses testified Monday, out of a dozen black and Hispanic men who say police targeted them because of their race.

One, Devin Almonor, the son of a police officer, said he was thrown against an unmarked car, and handcuffed when he was 13 and on his way home. He is 16 now.

The second, David Floyd, the lawsuit's namesake, testified that he was wrongly stopped twice. Both said they were testifying because they didn't want the same injustice to happen to other people. Floyd, 33, is now a medical school student.

City lawyers sought to discredit the witnesses by suggesting their stories had evolved over the years to become more dramatic.

Officers and criminologists who studied the statistics on street stops were also slated to testify. Lawyers also plan to play hours of audio tapes made by Adrian Schoolcraft, an officer who the department hauled off to a psych ward against his will after he said he refused to fill illegal quotas.

U.S. District Court Judge Shira Scheindlin, who has already said in earlier rulings that she is deeply concerned about stop and frisk, is not being asked to ban the tactic, since it has been found to be legal. But she does have the power to order reforms in how it is used, which could bring major changes to the nation's largest police force and other departments.

City lawyers said Monday that the department already uses many checks and balances, including an independent watchdog group that the department recently gave authority to prosecute some excessive force complaints against police. Officers have more than 23 million contacts with the public, make 4 million radio runs, and issue more than 500,000 summonses every year. Comparatively, 600,000 stops annually are not unreasonable, said city attorneys.

"The New York Police Department is fully committed to policing within the boundaries of the law," said Heidi Grossman, an attorney for the city. "Crime is not distributed evenly across the city."

The city lawyers said the expert testimony was flawed and that evidence would show that there is a correlation between the description of suspects and those stopped.

"Police are given an awesome responsibility, one of which is to bring crime down and keep people safe," Grossman said. 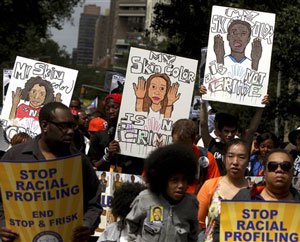 Street stops have risen dramatically since the 1990s, while overall crime dropped in a city that once had the highest murder rate in the nation. Mayor Michael Bloomberg and Police Commissioner Kelly say the stops are a deterrent that leads to lower crime.

With more than 531,000 people stopped last year, which is more than five times the number when Bloomberg took office a decade ago. Fifty-one percent of those stopped were black, 32 percent Hispanic, and 11 percent white. According to census figures, there are 8.2 million people in the city: 26 percent black, 28 percent Hispanic, and 44 percent are white.

About half the people stopped are subject only to questioning. Others have their bag or backpack searched. And sometimes police conduct a full pat-down. Only 10 percent of all stops result in an arrest, and a weapon is recovered a small fraction of the time.

Recent polls show a stark divide over how blacks and whites view the tactic, while among Hispanics disapproval of the practice has grown.