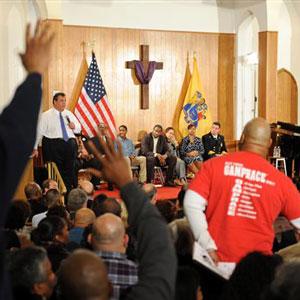 In this photo taken March 12, 2013, local residents try to get the attention of Gov. Chris Christie during a town hall meeting at St. Luke Baptist Church in Paterson, N.J. with over 700 people attending the event. Photo Credit: AP/The Record of Bergen County/Tyson Trish

TRENTON, N.J. (AP) - Republican Gov. Chris Christie has been asked to apologize for referring to the first black female leader of the state Assembly by race and gender, not by name, during a church-hosted meeting.

Christie, who's white, told an audience Tuesday that an "African-American female speaker of the Assembly" is blocking a vote on a school voucher bill that would let children in failing districts attend classes elsewhere.

Democratic Speaker Sheila Oliver later said she was "appalled" that Christie injected race into the discussion on education. Oliver, who represents a district with some failing schools, has said she believes the state should make a larger investment in public education.

On Thursday, the pastor whose church hosted the meeting asked Christie to apologize. He said the governor was disrespectful to the speaker and missed a chance to unite the community.

"I was and am saddened by the governor's blatant attack (on the speaker)," said Kenneth Clayton, pastor of St. Luke Baptist Church in Paterson. "The words that the governor chose to use in speaking of Oliver, while not even respecting her enough to call her by name, defy his earlier assertion that political leaders, himself included, need to learn to respect all views and work together."

A Christie spokesman said the governor's comments were misinterpreted.

The flap comes at an inopportune time for Christie, who has been courting the black and Latino vote for his re-election bid in November. 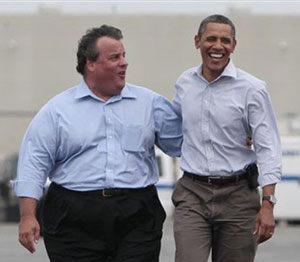 And a crucial part of Christie's narrative for 2016, should he decide to seek the Republican nomination for president, will be his willingness to reach across party lines to get things done. (For example: Recall his embrace of President Barack Obama six days before the presidential election after a tour of the state's Superstorm Sandy-ravaged coastline, for which he was renounced by some members of his own party.)

Political science professor Peter Woolley, of Fairleigh Dickinson University, said Christie's success at making inroads among black and Latino voters this year, will be gauged by analysts sizing up his presidential prospects. His urban policy proposals have helped distinguish him among Republican candidates, Woolley said, while "giving him entree to be taken seriously" in minority communities.

Christie traveled to South Jersey on Wednesday to pick up the endorsement of a black Democrat in rural Chesilhurst, a mostly minority community of 1,600 people. The mayor's endorsement may not mean much to the overall vote total - Christie beat Democratic Gov. Jon Corzine by 87,000 votes without Chesilhurst's support in 2009 - but garnering public support from a member of the Democratic base is important symbolically.

For Christie, winning in Chesilhurst would be especially sweet: It's one of the three towns former Republican Gov. Tom Kean didn't carry in his 1985 re-election victory. Christie credits Kean for getting him into politics.

"It is with great glee that I will depart Chesilhurst and call Governor Kean today and tell him, 'Now we'll see, maybe I'll be able to win one of those towns you couldn't win,'" Christie said Wednesday. "I think I have a better chance now that I have the mayor's support."

The mayor, Michael Blunt, would not weigh in on Christie's dust-up with Oliver. When pressed though, he said he would not be bothered if Christie referred to him as "the African-American mayor" of his town, rather than by name. 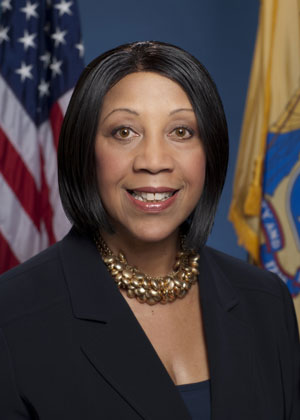 On Thursday, his spokesman, Michael Drewniak, noted that the head of the Black Ministers Council, Bishop Reginald Jackson, said in 2010 that the fate of the stalled voucher bill was in the hands of the Legislature's Democratic majority, especially Oliver. Jackson, an advocate of the bill, known as the Opportunity Scholarship Act, said then, "The Democratic Party must stop taking us for granted and failing to act for our children."

Christie, recently endorsed by the Latino Leadership Alliance, a coalition of 500 church groups, police and firefighter locals and civic organizations, whose chair, like Blunt, complimented him for taking the time to build a relationship with their respective communities and listen to their concerns. That audience cheered when Christie mentioned the $2 million he proposed for a pilot voucher program in his upcoming budget.

However, this is not the first time Christie has made a gaffe before a black audience.

In speaking about gay marriage in 2011, he compared the fight for marriage equality to the civil rights struggle of the 1960s and offended black leaders by insinuating that equal rights for minorities could have been gained through referendum rather than bloodshed. He later apologized, but not before Georgia Rep. John Lewis, a hero of the struggle, appeared in the capital city on behalf of gay couples' right to marry.