Are There Stereotypes About White People? 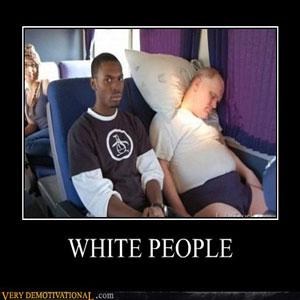 Although White people seldom think of it, other racial and ethnic groups do assign many stereotypes to them as a whole. Photo Credit: verydemotional.com

We all know the common stereotypes about African-Americans, Latinos, Jews, Asians, Muslims, and other high profile minority communities. They are said to be lazy, violent, dumb, smart, funny looking, money hungry, angry, brilliant lovers, or terrible ones. Whether the stereotype is positive or negative, it still unfairly paints everyone in a given group with a broad brush that fosters false beliefs about individual members of those groups. When people operate from these false beliefs their perceptions can lead them to misjudge and misunderstand what the other person is about and where they are coming from.

Stereotypes are rampant in today’s society although they aren’t verbalized as frequently as they used to be. However, the decreased admission of stereotypical thinking has done little to diminish its impact on those who are stereotyped, and has caused many who use stereotypes to become less conscious of their propensity to do so. In other words, they stereotype others consistently without being aware that they are doing it.

As a diversity trainer, I have conducted the “Childhood Stereotypes” activity over 300 times in the past two decades. I post large charts around the room, each with the name of a specific identity group, and ask participants to write one thing they learned in childhood about each of the named groups. The groups include men, women, Black people, White people, Asian people, Latino people, gay/lesbian people, and people with disabilities. Without fail, the White people in the room find it difficult to write on the “White person” chart. Many admit that all they were ever taught about being white was that they were “normal” or “American.” Members of the other named groups have no problem writing stereotypes they were taught about their own group.

So does this mean there are no stereotypes about White people? Of course not! Other words are written on the White people’s chart by the other populations in the room. Words like, “entitled, privileged, superior, uppity, rich, clean, mean, scared, and boring.” The White people in attendance appear surprised by the stereotypes that other races and ethnicities hold about them. They cannot personally relate to most of the words they see listed. The activity seems to open their eyes to the erroneous nature of many stereotypes and the hurtful impact of having others arbitrarily assign traits to you that you simply don’t possess.

Unfortunately a very small percentage of White people have the opportunity to come to this realization. Most just go through their day feeling “normal and American.” Given this fact, one might wonder if they will ever get it. And if they don’t get it, will they ever stop stereotyping others?

This is indeed, a question to ponder.

White stereotypes are out there and I personally have been exposed to them before. They are just not as common as the others. I feel they're not as common because white people are the less targeted of the groups. In regards to the other stereotypes I feel like they partially exist because people are afraid of people that appear to be different from them. It is easy to label negative aspects and create belittling nick names because that is what people usually gravitate towards. To name positive qualities about a race means you generally accept them and sometimes people are afraid of the ridicule that comes with showing acceptance. I feel like stereotypes will always be out there because no one will ever be able to gain every piece of knowledge there is about a race.There will always be those people that are disrespectful. I don't feel that every white person stereotypes other races. Yes, it is probably common but every person is different when it comes to how they view other people. I think whether stereotyping continues all depends on how much people instill respect of other people in their children. It also depends on whether adults are willing to be more open minded. To get everyone to stop creating stereotypes, I would have to say is a bit unrealistic.

I really like your comment about asking people to stop stereotyping entirely. Stereotyping started as a way to categorize people and was actually a beneficial process. It's impossible to learn everything about every race so we are going to group people whether it is fairly or not. I think a prominent white stereotype is that we are all spoiled. It actually is an eye opener because not all whites have money. I guess minority stereotypes are just more apparent, and we may not really see how ridiculous they are.