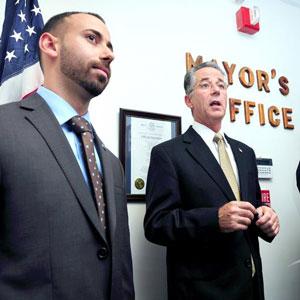 HARTFORD, Conn. (AP) — A suburban Connecticut city roiled by a police bias scandal has reached a proposed settlement of U.S. claims that officers engaged in a pattern of discrimination and abuse toward Latinos, officials announced Oct. 23.

The agreement, which mandates wide-ranging reforms of the East Haven Police Department, resolves allegations by the U.S. Justice Department's civil rights division that officers regularly used excessive force and retaliated against those who witnessed police misconduct or criticized officers.

A separate, criminal investigation by the FBI led to the January arrests of four East Haven police officers on civil rights charges. One of them pleaded guilty Tuesday to obstruction of justice, and another pleaded guilty last month to using unreasonable force during an arrest. Two others have pleaded not guilty.

"Entering into this agreement with the Department of Justice, and avoiding costly, prolonged and protracted litigation, is in the best interests of the town and the taxpayers," Maturo said. "While the cost to implement the provisions of the agreement is expected to be significant, this agreement represents another step toward turning yesterday's challenges into tomorrow's opportunities."

Maturo made national headlines himself when he said he might "eat tacos" when asked what he would do for the local Latino community after the FBI arrested the four officers.

The civil rights division, which announced the results of its probe in December 2011, began the investigation two years earlier following complaints that officers were harassing Hispanic residents of East Haven, a seaside city of about 28,000 people where Latinos make up about 7 percent of the population.

The settlement agreement, which still has to be approved by town agencies and a federal court, calls for a compliance officer to oversee the reforms. Its requirements include mandatory training on bias-free policing, development of up-to-date policies on applying for search warrants, and stronger community engagement efforts.

Thomas Perez, an assistant attorney general for the Justice Department's civil rights division, said the reforms will result in effective policing for people who leave, work, and travel in the town, outside New Haven.

"The proposed agreement will serve as a blueprint for sustainable reform that will provide the police department with the necessary tools and guidance it needs to restore trust from all segments of the East Haven community," Perez said.

Also on Tuesday, officer Jason Zullo, pleaded guilty to obstruction of justice, acknowledging that he falsified a police report. A plea agreement with prosecutors calls for him to serve one to two years in prison.

Last month, Sgt. John Miller, former president of the police union, pleaded guilty to violating a person's civil rights by using unreasonable force, prosecutors said. Miller admitted that on Jan. 3, 2010, he struck a handcuffed individual while the victim was in the secure custody of two other East Haven police officers.