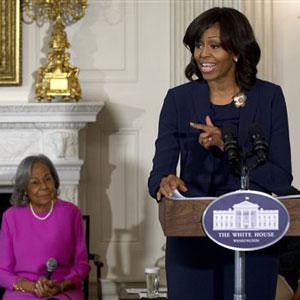 First Lady Michelle Obama introduces a panel of the cast and crew of the movie "42," next to Rachel Robinson, 90, widow of baseball great Jackie Robinson, attends a workshop for high school and college students, Tuesday, April 2, 2013, in the State Dining Room of the White House in Washington. Photo Credit: AP/Jacquelyn Martin

WASHINGTON (AP) - Michelle Obama said Tuesday that a new movie chronicling Jackie Robinson's rise through Major League Baseball, including the racial discrimination he endured while breaking the sport's color barrier in the 1940s, left her and the president "visibly, physically moved" after they saw it over the weekend.

The film, "42," also left the couple wondering; "how on Earth, did (the Robinsons) live through that? How did they do it? How did they endure the taunts and the bigotry for all of that time?" she said.

Mrs. Obama commented at a workshop for a group of high school and college students who saw the movie in the White House Theater. Some of the students attend a Los Angeles charter school named for Robinson and others are undergraduate scholars in a program that bears the baseball great's name.

The students also participated in a question-and-answer session with Robinson's widow, Rachel, and members of the cast and crew, including Chadwick Boseman, who plays Robinson, Harrison Ford, who stars as former Brooklyn Dodgers General Manager Branch Rickey, and director-screenwriter Brian Helgeland.

President Barack Obama held a separate screening of "42" for the cast and crew later Tuesday.

Mrs. Obama said everyone should see the movie, which opens nationwide April 12.

"I can say with all sincerity that it was truly powerful for us," she said. "We walked away from that just visibly, physically moved by the experience of the movie, of the story," and the "raw emotion" they felt afterward.

The first lady added that she was also "struck by how far removed that way of life seems today," noting how times have changed despite progress still to be made toward eliminating racial discrimination.

"You can't imagine the baseball league not being integrated. There are no more "Whites Only," signs posted anywhere in this country. Although it still happens, it is far less acceptable for someone to yell out a racial slur while you're walking down the street," she told the students. "That kind of prejudice is simply just not something that can happen in the light of day today." 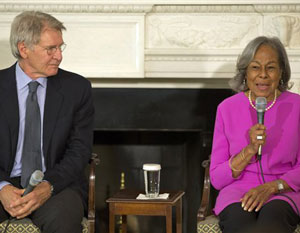 After several years in the Negro Baseball League, Robinson broke his sport's color barrier in 1946 to become the first black Major League Baseball player, batting for the Brooklyn Dodgers. His number was 42.

Barack Obama broke a similar barrier by winning election in 2008 as the first black U.S. president.

Echoing her husband, Mrs. Obama said the Jackie and Rachel Robinson story is a reminder of the amount of hard work it takes to move a country forward.

"It reminds you how much struggle is required to make real progress and change," she said.