WASHINGTON (AP) - The Washington Redskins' team name has been the subject of legal battles, political debate, and now will be part of a scholarly discussion at the Smithsonian about the use of Native American mascots and nicknames in American sports.

The National Museum of the American Indian will host a daylong symposium today entitled "Racist Stereotypes and Cultural Appropriation in American Sports." Scholars, sports writers, and Native Americans will gather for the public discussion.

The Redskins' name, perhaps the most visible, has been the subject of ongoing debate. As recently as Tuesday night, Washington Mayor Vincent Gray specifically avoided saying the name of Washington's NFL franchise in his State of the District speech and instead referred to "our Washington football team."

Museum Director Kevin Gover, of the Pawnee Nation, said the name "redskins" is the most offensive term for a team, at least to his ear.

"It is the equivalent of the n-word," Gover said. "That's how it was used when I was a child. That's the name people chose to call me if they wanted to hurt my feelings, and I think that's still the case in many circumstances."

The Redskins' name and logo was part of a 17-year court battle with a group of American Indians who say the name is offensive and want it changed. In 2009, the Supreme Court declined to hear an appeal from the Native Americans based on the age of the plaintiffs. There is now a new case filed by younger plaintiffs that is due for a hearing in March at the U.S. Patent and Trademark Office.

Former Colorado Sen. Ben Nighthorse Campbell, who will attend the symposium, said he introduced a bill in Congress about 20 years ago to block any federal land for a stadium for any team that carried a derogatory name. He debated with then-Redskins owner Jack Kent Cooke, who cited public polls supporting the name, before the Redskins opted to move to a site in Maryland.

"From my perspective, it's just a matter of basic fairness for anybody that's of a minority culture," Campbell said. "There are derogatory names for any group. Most of that has been cleaned up, there's been so much public pressure ... but unfortunately, it has not been that way for Indians."

The team did not respond to requests for comment Wednesday. Owner Daniel Snyder has been adamant about keeping the name. Last week before the Super Bowl, NFL Commissioner Roger Goodell defended the Redskins.

"I think Dan Snyder and the organization have made it very clear that they're proud of that heritage and that name, and I believe fans are, too," Goodell said.

Since the 1970s, hundreds of high school and college teams have done away with Native American nicknames, though many others remain. In 2005, the NCAA announced it would ban the use of American Indian imagery and nicknames at postseason tournaments. Some schools were granted exceptions with the support of tribes, such as the Florida State Seminoles.

The museum plans to explore the roots of Indian imagery in sports and elsewhere in American life. Gover said he's been thinking about the debate over such mascots since he was 15, attending junior high school in Norman, Okla., when the University of Oklahoma had a mascot called "Little Red" who would dance after the Sooners scored a touchdown. The university was among the first to abandon that mascot. Other prominent changes were made at Stanford University and Dartmouth.

"There's actually a long tradition in American life of 'playing Indian,' of pretending to be an Indian," Gover said.

In the nation's early years, fraternal organizations were formed around made-up Indian rituals and ceremonies in many Eastern cities, he said. In the 20th century, he said, the focus shifted to the theory that the Indians were on their way to extinction and "we're going to assert the right to represent who they were."

Professional sports teams using Native American names and imagery emerged around that time. The Washington Redskins were originally the Boston Braves, but owner George Preston Marshall changed the name in 1933 to avoid confusion with a local baseball team. The team moved to Washington four years later. 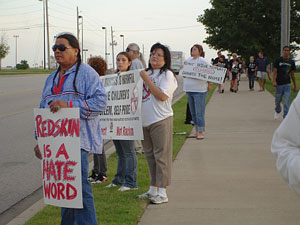 Manley Begay of the Navajo Nation, a professor of American Indian studies at the University of Arizona, said many people are surprised the stereotypical imagery is considered derogatory and racist. "It's very hard for someone to come to that realization," he said.

The lead plaintiff in the original case against the Washington Redskins said more team names will change over time. Suzan Shown Harjo, the president of the Washington-based Morning Star Institute, an advocacy group, said it was important to hold this discussion at the Smithsonian.

"The museum we have built is one of the places that these names, the symbology, the mascots, and the paraphernalia need to be retired to," she said. "They need to be consigned to the history books and to museums."

After reading the article and now having a better understanding to why native americans get offended over team names. I now believe there is no place for names like the redskins in sports. My uncle is a historian and has spend many years on reservations and has studied almost every native american tribe. He suggested at one point to honor tribes, like Florida State has, with votes of support. However, derogatory names have no place in your society, especially in sports when people cheer for that name.