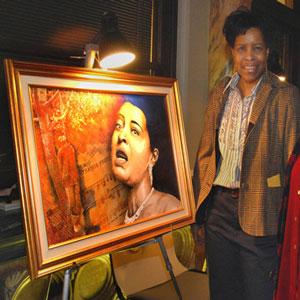 The painting, “Billie Sings,” by artist Denise P. Logan, The opening lines: ‘Southern trees bare a strange fruit. Blood on the leaves and blood at the root,’ of course the focal point hauntingly transports the listener into the ‘strange fruit,’ which are dead bodies. Also, in this illustration is a little of the sheet music for the song, and in the foreground, of course, is Billie's solemn look. Photo Credit: Denise P. Logan

Seventy-five years ago, Abel Meeropol wrote metaphoric lyrics for a famous by Billie Holiday. “Strange Fruit,” named one of the Songs of the Century by the Recording industry of America, dealt with lynchings, the ugliest and most violent expression of racism. Speaking of her painting, “Billie Sings,” artist Denise P. Logan says, “Billie Holiday made the song famous — a brave act considering the social climate back then. An angry mob nearly killed her, according to a scene in the movie Lady Sings the Blues. The hanged man in the illustration depicts an actual lynching (Joseph Richardson in 1913, Leitchfield, Kentucky) although this was not the lynching the song was written about.

“The opening lines — ‘Southern trees bare a strange fruit. Blood on the leaves and blood at the root,’ — of course the focal point hauntingly transports the listener into the ‘strange fruit,’ which are dead bodies,” says Logan. “My illustration does the same. The lynched figure is detected when you come closer and focus in on it. Otherwise, the tree is more readily obvious. Also, in this illustration is a little of the sheet music for the song. The foreground, of course, is Billie's solemn look. Appropriate not only because she is spotlighting a tragic reality, but because she herself was such a tragic figure.”

Logan speaks of the sad circumstances of Billie Holiday’s life — she died at the age of 44 from pulmonary edema and heart failure caused by cirrhosis of the liver. “Needless to say,” Logan notes, “she was a heavy drinker. When police arrested her for drug possession, she lay dying in her hospital bed. She had only 70 cents in the bank and $750 ‘on her person.’ (I won't say where on her person.) “So while the people she sang about in the song were lynched by angry mobs, Billie Holiday, with the help of her personal demons, lynched herself in a way.”

Logan, of course, is not the first to connect art and music. British musician/visual artist Brian Eno once commented on the connection between the two. “Painting,” he observed, “I think it’s like jazz.” Logan painted numerous jazz musicians — both black and white performers. “My Jazz Series,” she reflects, “began with an illustration of blues guitarist Buddy Guy. I drew him when I was in Chicago. I was homesick and feeling lonesome. The process of working out how to do that piece was a great source of relief.”

“Next in the series,” she recalls, “was the drawing of jazz saxophonist Dexter Gordon. My goal was to do four drawings of different instrumentalists to put on my wall — a quartet, I could look at and imagine their sounds. I got started with Winton Marsalis and work, school, and life in general interrupted the process. That half done illustration sat on my drafting table for about six years before I picked up my pens again and finished it here in Rochester (New York).”

Commissioned to do a portrait of Chris Botti, Logan has drawn other white jazz artists — “just because I liked their look,” she admits. Her interest in the look of things began when she was a child. “Surprisingly,” she reflects, “my first love was constructing models. My parents needed to supply me with models that were far beyond my age level to insure that I wouldn't have them done in less than ten minutes.”

“I liked the way things were put together and how they functioned once constructed. I liked taking things apart and putting them back together again,” she states. “I hated dolls, tea sets, and other toys that seemed redundant.”

Her interest in art extended to the arts: “I began playing piano in first grade, singing in fourth grade, writing poetry in fifth grade, dancing in sixth grade, and sculpting in ninth grade. I was a published author by eleventh grade. In my senior year, I developed a love for photography, and went on to major in Mass Media at Hampton University in Hampton VA. After graduation, I worked at the local PBS station and Gannett Newspapers before transitioning into graphic design as a career.”

Logan’s focus on pen-and-ink illustrations began when she worked at Ron Ketchum Associates, a commercial art studio. There, she says, “I first encountered tools I would use to do my first series of pen and ink illustrations. It was a number of city-related pictures that I call my Rochester series. The signature group of illustrations helped me refine the skill and solidify pen-and-ink as a medium I could do well with.”

Like many others, Logan finds art an ideal escape from daily stressors. “I draw (or paint) to deal with the stresses in my life, art is a coping mechanism. The intensity of the work reflects the intensity of what ever I am dealing with. So the majority of the jazz series was produced during my mother's decline and ended just before she died. I probably will never draw another jazz portrait,” she professes. 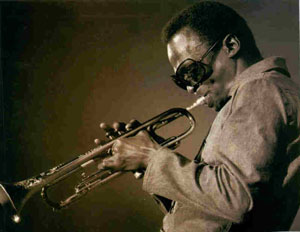 Logan returned to an earlier love. “Currently,” she reports. “I am working with photography. If, and when, I pick up my pens again, it will be to begin a series focusing on a different subject, using a different style. Time will tell what that will be.”

Although many might disagree, Logan provides this self-description: “I don't think of myself as a professional fine artist. If I make any money at it, it’s just a subset that results from my struggle to survive. Creating, for me, is breathing. It helps me get through the tough stuff. I won a few awards and raised a few eyebrows. But mostly, being able to say, ‘I went through that and I'm still standing’ is the greatest achievement. When I look at my pieces, I can tell you what was going on in my life when I did it.”

Jazz great Miles Davis encouraged innovation in this way, “Don’t do tomorrow what you’ve done today.” Admirers of Denise P. Logan’s work can look forward to the tomorrows that reflect the new goings-on in her life.