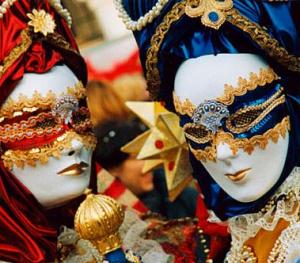 No matter when you find yourself in Italy, there are always a few festivals going on, and if you are lucky, one might be taking place where you are visiting. The website www.justitaly.org, touts the importance of festivals in this fun-loving country noting, “Italy is a land of beauty and glory. The Italians celebrate Christmas and the New Year with great pomp and show and there are hundreds of festivals held every year in nearly every town in Italy. Celebrations, festivals, and street parties are a big part of life in Italy.”

The festivals in Italy are interwoven around many of the religious holidays that are regularly celebrated. Even more interesting, a particular town celebrates different holidays and feast days depending on its location of north, south, inland, or by the ocean. One year when I found myself in Italy on May 22 in the southern part of the country, I stumbled upon a St. Rita Day celebration, who is the saint for lost and impossible causes, sickness, wounds, marital problems, abuse, and mothers. However, I learned that in Rome they did not celebrate my namesake’s feast day. 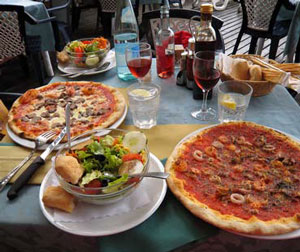 As well, according to an Italian colleague, Alfredo Mastracchio, Italians often put more emphasis on a celebration on their name day (also called feast days) than on their birthdays. In fact, www.italylogue.com notes, “Festivals you should look for include the various feast days that towns all over Italy celebrate – each town has a patron saint, and on that saint’s feast day the town usually recognizes the date with at least a little something. Throughout the year (though they seem to be more plentiful around harvest time), there are also lots of festivals called “sagra,” which usually center on a specific food.”

With so many feast days and festivals to enjoy, Mastracchio has put together a list of his favorite two or three per month, “not that I always get to these different towns,” he says, “but as a child, my parents took me to the festivals, and I have never forgotten.”

January begins with the New Year’s and Epiphany celebrations, which also include the Feast Days of San Antonio Abate and San Sebastiano, Il Palio di Sant’antonio Abate and the Fair of Sant’Orso, which has reportedly been happening for the past 1000 years. Epiphany, celebrated on January 6, is the arrival of the three kings, and it is this day, versus Christmas in December, when children hang their stockings for gifts from La Befana. 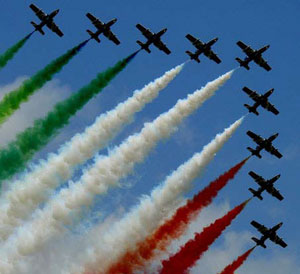 San Antonio Abate, held in the Abruzzo region of Italy, and on the island of Sardinia on January 16 and 17, centers on age-old rituals of bonfires and celebration. The Feast Day of San Sebastiano, celebrated mainly on the island of Sicily on January 20, might include certain towns parading a statue of the saint in the streets.

February brings Carnevale in Italy, but other festivals are also important such as Saint Biago Day on February 3, celebrated country wide with an emphasis on a fireworks display in Naples. Saint Faustino’s Day is February 15 in honor of the patron saint of single people, and the Patron Saint of the northern Italian town of Brescia.

In addition to the commemoration of Caesar’s Death on March 14 in Rome, the Feast Day of San Giuseppe or Saint Joseph is on March 19, which includes a donkey race called Palio dei Somari held in Torrita di Siena, near the town of Siena in Tuscany. It is also the date for Father’s Day gift giving, bonfires, and food.

Rome’s birthday falls on April 21, and since the Italians love to celebrate, you can always count on a good fireworks display. Other than Easter, which is of course a big holiday for the Italians, and includes celebrating the entire week before and the Monday following, there is Saint George’s Day. The Patron Saint of farm workers, this feast day is held in Caresana in the Piedmont region of the country on April 23. 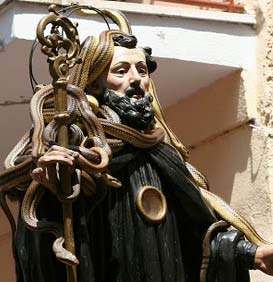 May kicks off the spring festival season, with May Day on May 1 being a public holiday. The Snake Handlers’ Procession is always on the first Thursday in May in the town of Cocullo in the Abruzzo region, and participants carry a statue of St. Dominic, the town’s patron saint, through town with live serpents. The Wedding of the Trees, Sposalizio dell’Albero, takes place May 8 in Lazio, a town in the north where the oak trees are decorated, and new trees planted as a reminder that everyone has a right to a particular amount of firewood each year.

With June comes the summer festivals and none are more enjoyed than the Festa della Repubblica on June 2, a national holiday in Italy. Luminara of Saint Ranieri is on June 16, the night before the feast day of Saint Ranieri, Pisa’s patron saint. The buildings and bridges along the Arno River come alive with thousands of flames in glass candleholders during this celebration.

July hosts numerous festivals during the warm weather, the most popular being Palio, held in Sienna with horseracing around the town square on July 2. Another is Giostra della Quintana in Foligno on the first Saturday in July, and the second Sunday in September, which draws hundreds of spectators and participants dressed in 17th Century clothes. 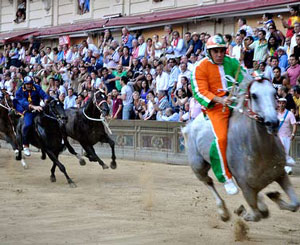 August is when most Italians vacation for the entire month, which centers around Ferragosto or Assumption Day on August 15. What is called Palio of the Pupe is held in Cappelle sul Tavo near Pescara with night parades and effigies that explode in a culmination with a fireworks display. There is also the Miracle of the White Madonna in the village of Portovenere in Liguria on August 17, complete with a torchlight procession.

As summer ends, Italians continue to celebrate with Saint Vito Day on the first Sunday of September in Ciminna in the Palermo province of Sicily. Also in Sicily, is the Festival of the Madonna of the Sick, which is always held the first weekend of September in the town of Misterbianco in celebration of a nearby sanctuary that was somehow left standing during a Mt. Etna eruption in 1669. The Feast Day of San Michele on September 29 is another well-known saint day held all over Italy, but especially prevalent in the south since it highlights an agriculture festival.

The Italians celebrate Halloween in October, but not quite like Americans. Instead, they host a celebration called Maschera di Ferro surrounding the legend of the man in the iron mask in the Piedmont region during the first weekend of October. There is also the Barcelona Regatta on the second weekend in October in Trieste, now considered the largest gathering of boats in the Mediterranean.

As November arrives in Italy so does the predominance of cold weather, and All Saints Day, a national holiday on November 1, and All Souls Day on November 2, includes bringing flowers to the graves of deceased loved ones. Truffles are big business in Italy this time of year so you might easily consider the Alba White Truffle Festival, or the San Miniato Truffle Fair. In Venice, the Festival della Salute is on November 21, in memory of the city’s skirting of the plague in the 1600s. Thousands of pilgrims visit the festival held at Madonna della Salute Church every year.

December of course brings Christmas, as well as the national holiday called the Feast of the Immaculate Conception on December 8. Saint Barbara Day is on December 4 in Paterno, Sicily at the slopes of Mount Etna, in honor of the town’s patron saint who protects firemen, and on December 6, the celebration of San Nicolo Feast Day in the Abruzzo region where bread and biscuits are generally eaten in conjunction with a lot of toasting with local wines.