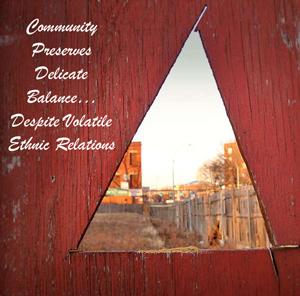 Another tempest loomed over the horizon in Brooklyn's Crown Heights. A 2008 series of events led to what some believe aided in fueling volatile relations between black and Jewish area residents, culminating in a confluence of sect-on-sect crime that might ultimately prove even more hazardous than the scarring the community experienced back in 1991. That summer, a 7-year-old Guyanese boy, Gavin Cato, was accidentally, but fatally struck by a motorcade transporting Orthodox Jews. The incident set off days of vicious rioting and fighting between blacks and Jews.

Just minutes after the initial incident an African-American mob brutally murdered a Jewish doctoral student, Yankel Rosenbaum, very near Cato's accident scene. During the time of this attack, people heard black rioters shouting anti-Semitic slurs like "kill the Jew." Since then, dangerous storm clouds continue to hover over the neighborhood, threatening to end a fragile peace alliance.

At the time, community leaders from both groups, including the Rev. Jesse Jackson, and Brooklyn assemblyman, Dov Hikind, came together to try to strengthen Jewish-black relations. They held open-forum community gatherings so that Crown Heights residents could voice their concerns, and even held multi-racial team basketball games to bolster unity.

During 2008, more violence again threatened this delicate balance. The beating of a 16-year-old African-American youth, Andrew Charles, by members of a volunteer Hasidic anti-crime patrol unit, was immediately deemed as a biased attack in which no arrests were made. Reports at the time indicated that a Jewish suspect sprayed Charles with mace as he and a friend strolled a local street. Then another attacker beat Charles with a baton.

Charles' mother, Wendy Craig, went to the press and accused police of double-standard tactics. She felt they were not aggressively investigating the case. Her words resonated just a few weeks later when the police arrested two black teens for the beating and robbing of 16-year-old Alon Sherman, an Orthodox Jew.

Sherman suffered a concussion and fractured jaw in the incident; the New York Police Department did not classify this incident as a biased assault because it occurred during a robbery. His attackers took the boy's cell phone, wallet and bike. Police set up command centers and began to mobilize its manpower to monitor the neighborhood's mounting tensions.

"There seems to be a double-standard in seeking and applying justice," says Brooklyn Councilman Charles Barron. "There is a way of thinking that says black life is not as good as Jewish life. That way of thinking has real consequences. It puts a chip on the shoulders of those made to feel inferior and gives a false sense of entitlement to those placed on high. The fact that they [Jews] have their own ambulance service and volunteer police detail in the heart of the community speaks to that. Now, when those two powers collide...."

However, history and science have taught us that even during the most raging storms there are instances of calm. Yosef Abrahamson, 16, looks to be that "calm." He stands as an overall symbol of the oneness that could be, and should be, among these adversaries.

As a Hasidic boy with black skin, born to an Egyptian father and descended from a Panamanian maternal grandfather, Abrahamson is an enigma. Having moved to Crown Heights with his family a couple of years ago from Omaha, Neb., he is the only child of color at his Yeshiva Darchai Menachem. He and his mother Dinah, and sister Sarah, are the only Orthodox Jews of color in the neighborhood. The family lives the Orthodox lifestyle as members of the Chabad-Lubavitch movement, a sect of Judaism that dates back some 250 years.

One can easily see how being a person of color and Jewish in a neighborhood almost two decades torn with tense relations would cause uneasiness or fear. However, according to Abrahamson, all is well in his life. He says he is free to walk in both worlds; a step others from either faction can only dream of during times of unrest.

This is my home now, and all of my friends are here," he says, noting that a majority of that circle consists of white Orthodox Jews.

"I'm proud my family may be able to help build bridges toward understanding racial differences," says Dinah Abrahamson. However, Ms. Abrahamson becomes serious when she reflects on the media's description of her as African-American because of her dark skin. "I am not a part of two cultures, black and Jewish. I am an Orthodox Jew."

However, the fact that Ms. Abrahamson and her family are descendants of Africa, yet sworn to traditional Orthodox values and lifestyle (her own Jewish mother having fled Nazi Germany), makes them very much a part of both identities in this America that judges citizens at face value. 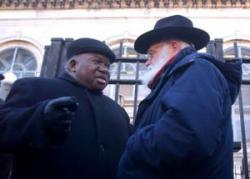 "Even when leaders moved in to quell the violence, they never dealt with the perception that Jews get preferential treatment in Crown Heights," argues Councilman Barron. "They only make up 20 percent of the population, but they've always walked these streets as if they owned them, and acted as if they are the only ones in the community that matter."

Assemblyman Dov Hikind has served the Crown Heights community for over two decades and was one of former Mayor David Dinkins' most outspoken critics during the riots of '91. In a New York Times article, Hikind reasoned that Dinkins "got the most blame because he was Mayor and the buck stops at City Hall." Dinkins had been accused of not using sufficient police force in order to quell the maelstrom.

However, these days Hikind strikes a much more conciliatory note. "We are one standing together yesterday, today and tomorrow. Forever," Hikind said in the wake of some of the more recent violence. "When anti-Semitism or racism happens, it's not about one community standing by itself. An attack on anyone is an attack on all of us."

The good news is that Hikind's words may resonate with the masses more than one might think, and certainly if Yosef Abrahamson’s thoughts are to be considered.

"I really like it here, and I feel safe," says Abrahamson. "I do not believe some of the incidents reported were racially motivated." Clearly, he believes his faith holds more significance than his race, an ideology we all might be wise to adopt.

However, that approach may not come easily to Crown Heights, a community made up of about 180,000 citizens, split between Caribbean-Americans (50 percent), African-Americans (39 percent) and Jewish (11 percent) residents, all seemingly leery of the other.

"Race relations are absolutely better than in the nineties, when we were like two ships passing in the night, picking up each other's radar," says Richard Green, a 60-year-old area resident and history professor. Green started the Crown Heights Youth Collective to stress "interaction instead of reaction" after the riots of 1991. "One small incident could escalate into something beyond our grasp," he says.

Abrahamson has a thought or two on that matter. His essay on the question of: "If you were Police Commissioner for a day, what steps would you take to reduce violent crime and protect all New Yorkers?" won a contest that earned him an honorary spot on the force for a day, and a face-to-face meeting with Police Commissioner Ray Kelly.

In his essay, Abrahamson stressed how he feels police should make "lesser crimes just as important as the more violent crimes." Certainly, that idea seems pertinent when one considers the fact that the police department and community have not always been in agreement in gauging how best to solve the problems of the neighborhood.

Criticism, which dates back to the original riots, ranged from arguments that local police are too slow to take action—to the biased nature that action seems to represent when it does occur.

"There's a lot of trouble in my community," says Yosef. "But I'm willing to do anything to help. Things have to change. I hope I can make some difference."