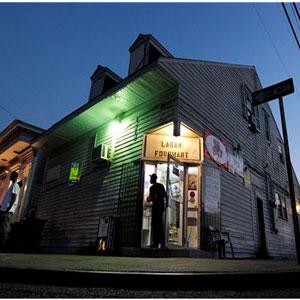 In this Oct. 11, 2012 photo, a patron exits the Laban Foodmart in the Treme section of New Orleans. The historic New Orleans neighborhood where immigrants, free people of color and slaves were allowed to own property, worship on Sundays and gather in public to dance and play music, has hit a milestone. Roughly 200 years ago, cottages were built and a community established just beyond the French Quarter, named for French milliner/property owner, Claude Treme. Photo Credit: AP/Gerald Herbert

NEW ORLEANS (AP) — The colorful and musical New Orleans neighborhood called Treme is marking the 200th anniversary of its origins as an early melting pot for the city and the U.S.

Treme is considered one of America's most unusual neighborhoods and holds significant place in the history of jazz. It is also getting some new energy thanks in part to the spotlight provided by the HBO series "Treme."

"All the things sacred to New Orleans bubbled up from that neighborhood, because Treme had such a mixture of people and cultures," said Toni Rice, a spokeswoman for one of the neighborhood groups organizing its bicentennial celebration. "It wasn't just slaves. It wasn't all white or all black. It was German, Spanish, Haitian, Italian."

Born from the immigration that followed the Haitian revolution of the early 1800s and named for French milliner and property owner Claude Treme, the neighborhood became an entertainment center where white and black Creoles gathered.

The wave of Haitian refugees added to a New Orleans that was already a mix of French, Spanish and African-American culture, with American influence filtering in after the 1803 purchase of the territory from France. New Orleans was still largely confined to the French Quarter — the original city founded in 1718. Treme and other outlying neighborhoods were farms or swamps until efforts to drain the land took hold as the population grew.

It's the site of St. Augustine, one of the oldest African-American Catholic church parishes in the nation, where famed clarinetist Sidney Bechet was baptized in 1897 and where Homer Plessy was a parishioner. In 1892, Plessy triggered the infamous U.S. Supreme Court case, Plessy v. Ferguson, which upheld the constitutionality of state laws requiring racial segregation in public facilities under the doctrine of "separate but equal."

It's also the site of Congo Square, where during the 18th and 19th centuries slaves were permitted to dance, trade goods and play music that would evolve into jazz. Generations of musicians hail from Treme, among them Troy "Trombone Shorty" Andrews and his grandfather, the late "Ooh Poo Pah Doo" singer Jesse Hill.

It was also home to the recently deceased Lionel Batiste — the vocalist, drummer and assistant leader of the Treme Brass Band who was known simply as "Uncle Lionel." And it was the birthplace of jazz singer and trumpeter Lionel Ferbos, who at 101 is believed to be the oldest working musician in the city. He performs regularly at the Palm Court Jazz Cafe in the French Quarter.

Percussionist Shannon Powell, 50, has lived in Treme his entire life. It's where at age 11 he performed "Bourbon Street Parade" at a now-closed jazz club near his house and where as a teenager he was discovered by singing banjo and guitar player Danny Barker, who helped launch Powell's career. 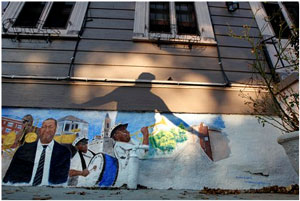 "I caught the tail end of a lot of good things, of old ways of doing things," Powell said. "Jazz funerals meant a lot more than they do now. They were so respectful and dignified. The procession dressed in suits, wore black and white, and they played a slow dirge until the body was put in the ground. It's not like that anymore. Now you have kids out there in jeans playing all kinds of stuff."

Still, after years of blight and crime problems, a slow revival is taking shape. Treme is now part of a multimillion dollar Department of Housing and Urban Development revitalization plan, which could include the removal of the interstate highway. Work is under way to turn an unused rail corridor into a miles-long walking and bike path called the Lafitte Greenway.

"This neighborhood is an example of survival," said Wayne Baquet, who operates Lil Dizzy's restaurant. "The city lost a big part of the middle class due to white flight and then black flight to newer neighborhoods like New Orleans east and Gentilly.

"After Katrina, which practically destroyed those two areas, Treme is coming back. People have realized that the closer they are to the older parts of the city the less problems they're having in terms of infrastructure," he said.

Floodwaters from levee failures during Hurricane Katrina, which struck in August 2005, inundated much of the city. But the French Quarter and nearby neighborhoods are built on higher ground and suffered less damage.

Treme consists of roughly 150 square blocks. According to 2010 census figures, 4,155 people live there.

Rice said that as Louisiana celebrates its statehood bicentennial, it was fitting that New Orleans commemorates the establishment of Treme. Festivities begin on Tuesday and continue through Sunday. They include discussions of the neighborhood's history and performances by jazz trumpeter Kermit Ruffins, clarinetist Doreen Ketchens and the Treme Brass Band.