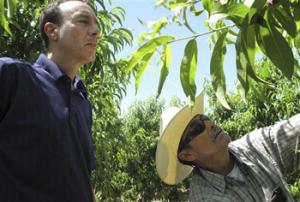 In this April 29, 2014 photo, Dan Gerawan, owner of at Gerawan Farming, Inc., left, talks with crew boss Jose Cabello in a nectarine orchard near Sanger, Calif. Gerawan is in a battle with the United Farm Workers, which wants to represent thousands of workers at the family farm. Photo Credit: The Associated Press, Scott Smith

Hispanic workers are locked in a battle with farmers in Central California where some of the nation's largest orchards and vegetable crops thrive.

Six months ago, Hispanic workers at one of the largest fruit farms in the U.S. went to the ballot box to decide if they would continue to be represented by the United Farm Workers, which won that right two decades ago but never forged a labor contract.

The ballots, still uncounted by state officials and locked in a safe, sit at the center of a dispute between the union launched by iconic farm labor leader Cesar Chavez and Gerawan Farming, Inc., which hires more than 5,000 primarily Hispanic workers annually to tend and harvest nectarines, peaches and plums.

Chavez has long since passed away, but the UFW's fight to get workers at Gerawan a union-negotiated contract goes on, moving from the farm's vast orchards in Central California to courtrooms amid accusations of broken labor laws and intimidation tactics.

In California, the nation's most productive agricultural region, unions over decades have won more than 750 elections to represent Hispanic workers, said Philip Martin, a farm labor expert at the University of California, Davis. But that never resulted in more than 350 negotiated contracts, so Martin said another 400 farmers may find themselves in the same position as Gerawan.

In the South, such as North Carolina, a few farmers and food processors have recently unionized, said David Zonderman, a labor historian at North Carolina State University, adding that the region still remains at the bottom of national rankings for organized labor. "It can be Michigan, Main, North Carolina or Northern California," Zonderman said. "Organizing Hispanic farm workers is very, very difficult."

Dan Gerawan, who runs the family business in Central California and claims it pays the highest wages in the industry, said the union and a runaway state labor board are in collusion, using what he considers to be an unconstitutional state law to take control of his business and rob his Hispanic workers of their choice of whether to be represented. 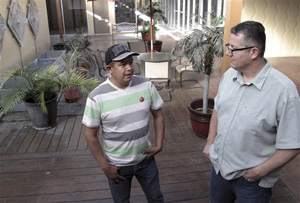 Gerawan said the UFW turned its back on the workers for 20 years, until recently returning out of nowhere. "There's no longer peace in the fields," he said. "What was our sin that justifies this?"

UFW's National Vice President Armando Elenes said Hispanic farm workers need protection today more than ever from abuses such as low wages, exposure to harmful pesticides and working in extreme heat. He disputed union critics who say the UFW is reasserting its long-dormant right to represent workers merely to bolster its membership rolls and dues. "It has nothing to do with a money grab," he said. "It has to do with improving conditions for workers."

This feud dates back to 1992, when the UFW began to represent Gerawan's workers. The two sides met once, without agreeing to a contract. After that, Elenes said UFW leaders realized they were up against a powerful, anti-union farm.

The union turned to Sacramento, Elenes said, and won passage in 2002 of a law that calls for mediation if two sides can't reach a contract. The UFW tested the law at three smaller farms in San Joaquin and Madera counties, gaining hundreds of new members before returning to Gerawan in 2012.

Gerawan said in the two decades that passed he heard nothing from the union. "Not a letter, no phone call, no fax, no email, no contact at all," he said. Elenes said there was no disappearing act, as Gerawan claims.

In a new round of negotiations last year, the sides met repeatedly without agreeing on a contract, and the UFW invoked its right to a mediator. Gerawan appealed, saying having a mediator order a contract has "dubious constitutional validity" and would unfairly force the union on him and his workers. UFW's Elenes said he would rather obtain a voluntary agreement and not have to use the mediation law. 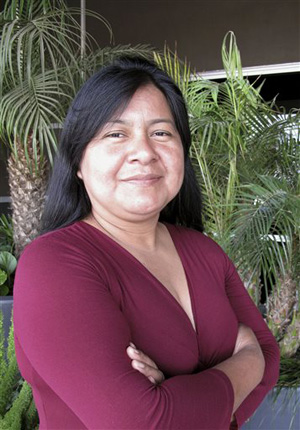 Silvia Lopez, who has picked peaches for 15 years at Gerawan, said she is happy with the pay and working conditions. "If they don't treat me good, I don't stay there even one day," the 38-year-old said. Lopez said she doesn't want the UFW taking 3 percent of her paycheck in dues. She led a signature drive to hold a vote on whether the workers want the UFW to represent them anymore. The vote happened Nov. 5, and she believes the ballots - if counted - would drive out the UFW.

Silas Shawver, director of the state Agriculture Labor Relations Board's office in Visalia, said the ballots remain untouched because of unsettled allegations made by the UFW that Gerawan's crew bosses coerced workers into signing the petition calling for the vote, compromising the process.

Shawver denied that the agriculture board is on the UFW's side, saying his office is independent and bound by law to investigate potential violations of worker rights. Gerawan said his crew bosses have not intimidated workers, and he wants the votes counted.

Gerawan worker and union supporter Severiano Salas, 34, said in Spanish with the UFW's Elenes translating that working conditions have improved since the union returned. Salas, who has worked at the farm for 15 years, said he is ready to pay 3 percent for full union representation.

"What would I tell my kids if I didn't do this?" he said. "If I didn't defend myself, how am I going to face them?"